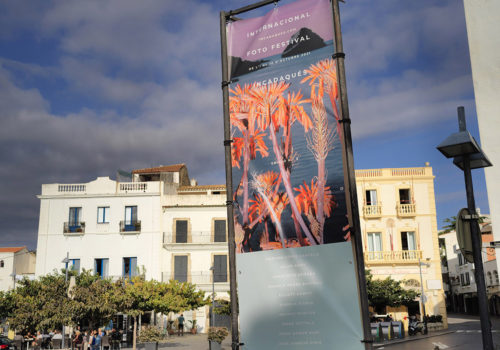 Bordering the Cap de Creus park, the easternmost town in Spain is therefore hosting the international photography festival for its fifth edition. Isolated from the rest of the upper Empordà by the presence of the nearby mountains, the village of Cadaqués was preserved from an urbanization that is seriously taking over all around, and now, it now displays its charms facing the sea. The surrounding landscapes can even be grateful to an unexpected defender, in the person of Salvador Dalí, who lived as a neighbor in Port Lligat, and made known his dissatisfaction at the sight of real estate developers snooping around in the 1960s. A charming asset that Valmont Achalme was able to put to good use, the project manager with Olivia Seigneurgens and their young team distributed the exhibitions of 35 artists from 17 different countries, along steep alleys, typical of the village, in galleries, or historical buildings. Non-exhaustive selection and impressions.

Resident of the year and benefiting from the beautiful space of the Patrick J Domken gallery, Letizia le Fur revisits Ovid’s Mythologies with her fiery colors, with a third chapter “Metamorphoses”, made up of almost psychedelic visions of the surrounding nature, naked bodies, mixed with vegetal and mineral, all in organic sensations and lights; a new Eden in Cadaqués?

Decentralized and accompanied by Simon Baker himself, two exhibitions of the Parisian MEP take place here this year: In the beautiful terraced garden of Dalí’s house and mounted on panels, “The eye is a camera” deals with the reports of the artist with rebellious mustaches with the still image, and offers us as a bonus a stroll and an unprecedented view of the pretty cove of Port Lligat.

Helmut Newton’s display, on the first floor of the Societat 1’Amistat, includes the fashion photos of the Berlin photographer, his celebrity portraits and prints from the “Private property suite I-III” portfolio. The ensemble, produced between 1967 and 1986, offers us a condensed version of the Newtonian gaze, where men are often reduced to the role of accessories, alongside dominant women, combining eroticism, allure and malicious provocation. Some comments heard during the visit imagine that it would be difficult to make these images nowadays. However, Helmut Newton did not display a political program but photographs, and we can also simply contemplate the depth of these, superb silver prints toned with selenium, made in the 80s by Thomas Consilvio.

Born in Tokyo and living in England since 1996, Tomoko Nagakawa shares the Taller galería Fort with Olli Bery, but also a common exploration of the familiar, through analog techniques, of the forms and the sensitive materials of traditional papers. The Japanese photographer celebrates life and the temporalities that constitute it, composing with those close to her, evoking silence and a minimalism linked to nature.

Dominating the village, the Church of Santa Maria provides a particularly favorable setting for introspection and the vision of Nyima Marin’s “L’adieu du Minotaure” cyanotypes. Alongside the impressive Baroque altarpiece in the Great Hall, the caresses of bluish light from the images underscore the sensations of the artist’s initiatory journey to his native land, Crete. A veritable labyrinth of shapes, materials and memories, particularly well accompanied by poetic texts, the whole reflects a sensual and carnal melancholy.

Lei Davis’s images plunge us into darkness and abstraction. The photographer of Filipino origin, and Arlesian by adoption, shows us liquid matter from which mysterious, dark and sensory universes are born, and invites us to question our inner world. At the sight of his series “Dark sky, deep sea”, the animated version of which was selected at the MAP 2021 festival in Toulouse, one can wonder if the sea is not as deep as the sky.

It remains to cite the other exhibitors, all of them of high level: Aglaé Bory, and her exiles suspended in Le Havre, digs her very personal furrow; the abandoned bourgeois apartments of Jordi Baron Rubí, the masculine universes of Giorgia Fiorio, the homage to Elliott Erwitt, the installation by Olivier Chanarin “Gravity is the attraction between distant objects” re-creation of a work by Marcel Duchamp, weightless.

Cyanotypes and anthotypes workshops, wet collodion; screenings and meetings, nautical trips, concerts and festive cocktails round off an eclectic program.

The artists forming this edition, and the very artistic line of INCADAQUÉS, could be likened to the act of tasting; they taste the world and its nature, they taste the intimacy and the life of their fellows, and appropriate everything to return it to us in the form of vibrating sensations of materials and energies, summoning in us the desire ‘to participate in it and to taste it in our turn, in this world.