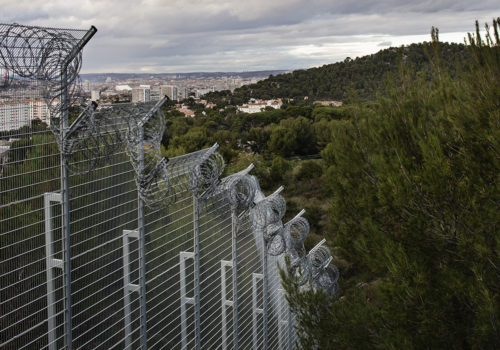 Proche is a step in the process of a long-term work on French prisons and this time tackles the policy of confinement in France through absence and hollowness, without ever showing the prison but by comparing its adjacent, residual marginal realities. Proche is an artistic, utopian attempt aimed at bringing detainees out of their isolation by focusing on the areas of contact between the City and the Prison, in these intermediate spaces, tenuous interstices where the fragile links between the prisoners and the prison are revealed the society that locked them up. Since 2016, the author has immersed himself in the dreams of detained people, collected in letter-writing correspondence and whose readings by anonymous people are filmed in My Familiar Dream, he photographs the Carceral Peripheries, spaces adjoining some twenty new places of confinement in France and portrays relatives of people detained in Strasbourg, photographed at the exit of the visiting rooms in the series L’instant après. The artist treats these distinct states as disparate materials, tiny and partial components of a complex reality. Proche’s ambition is that slowly, collectively, the portrait of the prisoner, invisible to the image, is sketched out, invented over the course of his dreams, the imprints that his absence generates on others than himself, geographies that his isolation draws in the landscape. Grégoire Korganow Committed artist, collaborated as a photojournalist for 20 years with renowned French and international newspapers. His images were immediately exhibited in prestigious places in France and internationally. His works are the result of a process of stripping and utopia, in search of unspeakable truth or buried intimacy. He is particularly interested in areas left in the shadow in France, from which he brings out a sober and raw reality. His gaze on the body, a sensitive territory of which he reveals contrary movements (tensions and relaxation, constraint and freedom, power and fragility, presence and disappearance …), leads him to take an interest in the performance and the medium of the film in the creation of his works.

Grégoire Korganow’s artistic immersion in “peri-prison areas” has been supported from its inception by La Fondation du Groupe M6, which defends an alternative model to detention for a gradual return to society. This polymorphous project has also gathered since 2016, support for the creation of the Fondation des Artistes, the SCAM – Brouillon d’un rêve or the Normandy Region, support from organizations fighting against poverty and exclusion such as the Georges Hourdin association, Secours Catholique – Caritas, MAS, as well as private support such as Gepsa. Proche was produced with the invaluable assistance of L’Observatoire International des Prisons – French section and Prison Insider. The publication of this work is supported by the Ministry of Justice – Directorate of the Penitentiary Administration.

Never seen exhibition as part of the 75th edition of the Avignon Festival from July 5 to 24, 2021 at the Church of Celestins, Avignon