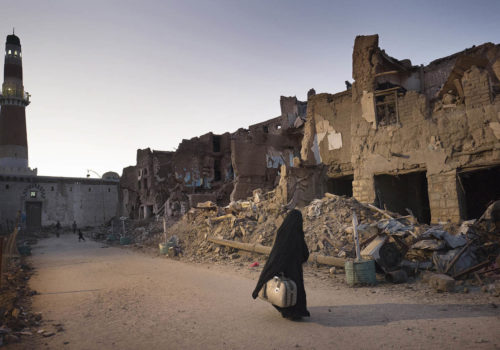 Created in 2011, the Humanitarian Visa d’Or of the International Committee of the Red Cross (ICRC) every year rewards within the framework of the prestigious international festival of photojournalism in Perpignan, Visa pour l’Image, a photographer who has worked on a humanitarian mission.

After “respecting the medical mission” (2011-2014), then “Women in armed conflicts” (2015-2017), the ICRC wanted, through this competition open to professional photojournalists, to deal with the humanitarian consequences of wars in city.

Since 2018, the winners of the ICRC’s humanitarian VisaOr, Véronique de Viguerie, Abdulmonam Eassa, Alfredo Bosco and Antoine Agoudjian have covered and documented “The war in the city”. It comes down to horror for civilians. They are either condemned to flee their homes and neighborhoods, abandoning everything, or, on the contrary, forced to hide in caves, hoping that the fighting will cease quickly.

Yemen, Syria, Mexico, Nagorno-Karabakh, such are the contexts to be rediscovered in this “City at war” exhibition, thanks to the talented and seasoned eyes of these photojournalists whose work, imbued with humanity, reminds us that any war must have limits. These limits are set by the Geneva Conventions, to which all the States of the planet are parties. They protect all victims of armed conflicts, from wounded or captured combatants to civilian populations … Common Article 1 of these major texts stipulates that the 196 States have undertaken “to respect AND to ensure respect in all circumstances” the Conventions of Geneva… Respect and ensure respect!

War in the City

The humanitarian consequences of fighting in urban areas are still appalling.

Main victims, civilians. International humanitarian law (IHL), whose foundations are the Geneva Conventions, nevertheless protects them, as well as the infrastructures necessary for their survival; drinking water stations, for example, or even hospitals.

One of the cardinal principles of international humanitarian law obliges any belligerent to distinguish combatant and non-combatant, and consequently to spare the civilian population.

The ICRC works in most of the cities at war, alongside the national Red Cross or Red Crescent societies involved. It tries on a daily basis to provide answers to the distress of the populations, while negotiating with the belligerents humanitarian access.

One question for city dwellers trapped in the fighting: try to flee or wait, holed up, waiting for an improvement? Bombing or shooting indiscriminately in densely populated areas is prohibited by IHL. The main consequences for civilians are five:

– The lack of any security due to the fighting, the bombardments but also the mines, improvised explosive devices, unexploded projectiles but also the behavior of the belligerents.

– Shortages of food, water, medicine, but also electricity and fuel.

– Inability to access healthcare due to damaged or destroyed hospitals, and a shortage of health personnel due to insecurity.

– The immediate deterioration of the socio-economic situation as well as access to education or employment.

– Finally, the evacuation of populations from cities, when possible, remains a major humanitarian challenge since it is necessary to assist thousands of displaced people while supporting the local populations.