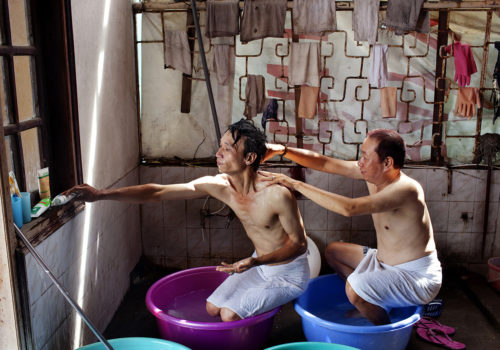 New Queer Photography is dedicated to all queer people who suffer for their way of life, fight for it, or simply celebrate it.

Julia Gunther takes us on a lesbian beauty pageant in a South African township in her series “Rainbow Girls”, Bradley Secker portrays LGBTIQ+ asylum seekers from the Middle East in “SEXugees”, Shahria Sharmin documents the lives of “Hijras”, who have been tolerated as transgender and intersex people on the Indian subcontinent for centuries, Milan Gies deals with prevailing body images in Europe in his work “State of Identity”, in “The Pink Choice”, Maika Elan portrays everyday queer life in Vietnam, and Clifford Prince King shares intimate moments between gay black people and people of colour in the USA.

Although current films, series, and Western culture in general suggest that there is broad social acceptance, being lesbian, gay, bisexual, transgender, intersex (LGBTIQ+) or simply queer – as a unifying term – still means discrimination, stigmatisation and exclusion in numerous countries and societies. This not only applies to non-western and non-industrialised countries, but also within Europe, where every tenth person who is open about being queer is still the target of physical violence or sexual assault, as demonstrated by a survey published by the EU Fundamental Rights Agency (FRA) in 2020.

For more than four years, dedicated art director and editor Benjamin Wolbergs has collected perspectives from queer photographers from all over the world for his publication New Queer Photography: in addition to works from Europe and the USA, there are series from India, Lebanon, South Africa, Vietnam and the Cape Verde Islands.

In their experimental artistic practice, the authors of the images reflect the attitude to life of a new and young generation of queer people who – despite discrimination – live their identity with self- confidence and pride. They use the artistic space to play with genders and ascribed role models without prejudice or danger. Their approaches range from purely documentary reporting to an artistic/staged examination of their own body images.