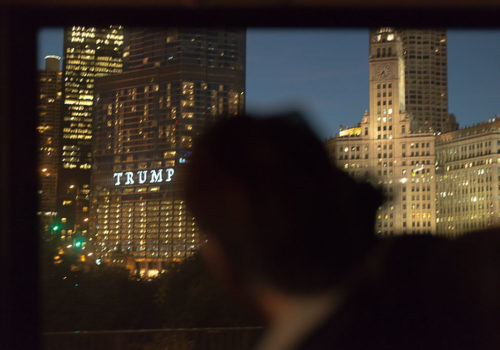 Expo Chicago: An International Art Fair in the Windy City

A view of Lake Michigan, skyscrapers by Mies Van Der Rohe, “Chicago-style” hot dogs served as petit fours at the opening—where else could we but Expo Chicago, the Midwest’s biggest contemporary art fair?

For this third edition of the festival, Expo Chicago festival Tony Karman is asserting the faire’s international stature. Ideally located on Navy Pier, which extends almost a mile into Lake Michigan, and held from September 18th through 21st—a crucial month for gallerists—Expo Chicago certainly has potential to reach its goal, as shown by the 140 galleries from 17 different countries.

This year was also the opportunity for Expo Chicago to differentiate itself from other international fairs (FIAC, Art Basel, Frieze London) and establish its own rhythm. One thing Expo Chicago isn’t lacking is personality. At the opening, collectors, local artists and the general public rubbed shoulders in a friendly, festive atmosphere.

Among the 140 galleries taking part in Expo Chicago, around ten exhibited photography exclusively. These included art fair regulars like Robert Koch (San Francisco), Tom Gitterman (New York), Stephen Daiter (Chicago) and Larry Miller (New York). Some beautiful vintage prints were on display: a 1935 Man Ray portrait of Meret Oppenheim, a modernist František Drtikol print at Robert Koch, work by Willy Kessels and Irene Bayer at Tom Gitterman’s stand. But there were also discoveries to be made, including the recently unearthed work of Hungarian photographer János Szász, active from the 1950s to the 1970s, at Robert Koch, while the Hill Gallery from Birmingham, Michigan, presented the work of a little-known Detroit photographer, Bill Rauhauser, who documented the city in the 1960s and ‘70s.