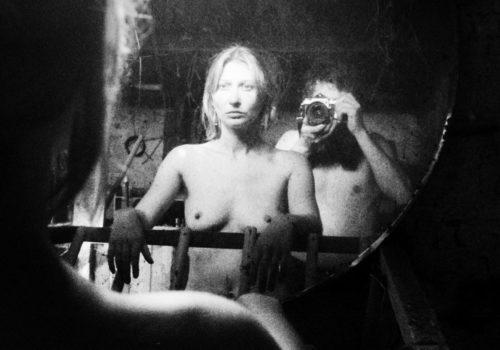 Every year FOMU selects ten promising phototographers, all living or working in Belgium. In addition to a variety of networking opportunities, FOMU will accompany them on a development journey to create the portfolio magazine .tiff, culminating in a group exhibition.

Like ‘Belgian photography’, .tiff has many angles. It gives a flavour of the diversity and energy of the Belgium’s photography landscape. Using .tiff, FOMU offers emerging talent a platform to reach a wider audience and a network.

In 2022, .tiff turned ten years old. Since 2018, tiff has been a part of Futures, a partnership between FOMU and a growing number of other European organisations.

Alice Pallot
SUILLUS, Looking at the sun with closed eyelids shows a carefree day in the life of photographer Alice Pallot during the first covid lockdown in 2020. Together with friends, she headed to the Lommel Sahara, a large sandy plain in Limburg, Belgium. The area appeared doomed to become a desert after years of industrial pollution. But a native mushroom, Suillus, saved the day, allowing flora and fauna to recover and grow even in such conditions. As Pallot explored, she looked for the invisible, played with objects that lay around, and recycled whatever came her way. Each photograph was subtly manipulated on site rather than being digitally processed, resulting in images that hover between reality and science fiction.

Arian Christiaens ​
“The apple doesn’t fall far from the tree”, was Arian Christiaens’ observation after going in search of her identity as a photographer, woman, lover and mother. ​ With her project In Camera, she overlaps with her parents, delving into the family archive and merging her own work with that of her mother and father. Christiaens looks out at us through her mother’s eyes, through her father’s lens, through the mirrors in a room, and a camera. And we follow her retrospective glance, and see ourselves portrayed and  the photography medium as well. ​

Barbara Debeuckelaere
In her essay Slobozia, Texas, Barbara Debeuckelaere investigates the impact on Romanians of the American TV show Dallas. This 80s soap about greedy oil barons was only allowed on Romanian television as a warning against capitalism. But the communist leader Nicolae Ceaușescu’s idea backfired: Dallas became wildly popular. Following the revolution in 1989, one rich fan even built a copy of Dallas’ famous ranch. Debeuckelaere portrays the show’s Romanian fans as glamorous characters from the series. As they play their roles for the lens, they also betray their own sorrows, hopes and lost dreams. The project also highlights the stark contrasts at work between illusion and the complex reality of Romania. ​

Cédric Kouamé
Cédric Kouamé came across the Hosanna Community’s photograph archive in Ivory Coast. This Christian association, which exists to this day and connects people across the entire country, was founded in the 1980s by Georges Adoh. ​ ​
Mould and archives: not something archivists and curators like to see together. But for Kouamé, it was a gift. ​ The ravages of time have visibly eaten away at the photographs. For the project Hosanna Community, Kouamé set about excavating and resurrecting the images to give them a second life. The marks left by time have taken nothing away – instead they have added a new and relevant organic layer. ​

Emile Rubino
Training is an enigmatic, surreal documentary series that questions the notion of authorship. Emile Rubino made these photographs during a lighting class when he was studying photography at Emily Carr University of Art and Design in Vancouver. We see his teacher and fellow students in a succession of test photographs – not originally intended to be shown. This is art that was not supposed to be art, and is the core of Rubino’s artistic practice: exploring boundaries and challenging the viewer to think critically about art. ​

Gülşah Ayla Bayrak
Gülşah Bayrak’s Bloody Hamam was inspired by the contrasts and similarities between East and West, Europe and Asia, woman and man. Each photograph can be viewed as an individual, provocative work, but seen together, the series becomes a wave of poetry that buoys up the viewer. The photographer—impulsive, philosophical, nihilistic, utopian—does not allow her work or herself to be easily defined. Her playful, critical visual language is a tool to tackle fundamental issues around migration, identity and truth. ​

Lars Duchateau
For Limburg, Lars Duchateau created visual interpretations of local news reports from Het Belang Van Limburg, dating from November 2019 to April 2022. There were no images attached to the original reports, aside from the occasional stock photograph. Duchateau documented the exact locations where these events took place in meticulous detail, using medium and large format analogue cameras. The use of this slow and laborious process lends exaggerated gravitas to what were actually banal news items and creates an ironic contrast to the ephemerality generally associated with newspapers and the media.

Ligia Popławska
Imagine suddenly losing your ability to smell, see or feel. With Fading Senses, Ligia Popławska looks at the impact of loss of senses on our mental health and explores the concept of Solastalgia. Solastalgia describes the emotional distress—the climate anxiety and ecological grief—caused by climate change. ​ Our senses are the direct conduit between humans and nature: when they are disturbed, the core of our existence is rattled. If fundamental changes to our environment occur simultaneously—collapsing ecosystems and climate—we experience great sadness and even existential despair. This disconnection is palpable in Popławska’s alienating images. With great subtlety, the photographer sheds light on the mental, emotional and physical implications of changes to the senses and the environment. ​

Rami Hara
Glittering hijabs and shiny durags are the inspiration for Rami Hara’s photography series Hooyo, Project Ciidna and Durag. Traditional Somalian clothing is characterised by luxurious, colourful fabrics. Dressed thus, Rami Hara’s models embody royalty and deities – a positive portrayal of the African diaspora in contrast to the fraught, often problematic portrayal that people of African descent have to contend with. The resplendent models in these images are Hara’s relatives and acquaintances. In Hooyo, there is particular emphasis placed on the importance of his family, with his strong, elegant mother in the role of muse.

Seppe Vancraywinkel
Seppe Vancraywinkel has been working on Within the Bubble of Surroundings—an ode to friendship and freedom—for several years. A close-knit group of young adults explores their surroundings and takes us inside their intimate world. Vancraywinkel is more of a participant than a spectator: he portrays his friends in a romantic light that challenges stereotypes about men. The easy-going, carefree nature of Vancraywinkel’s photographs invites the viewer to linger, to join in, to climb and leap – to escape to a time outside of time. ​

ABOUT .TIFF
In 2022 .tiff will be 10 years old. ​ Tiff originally started out as a printed magazine in 2012 and grew into an international platform that supports Belgian photography.