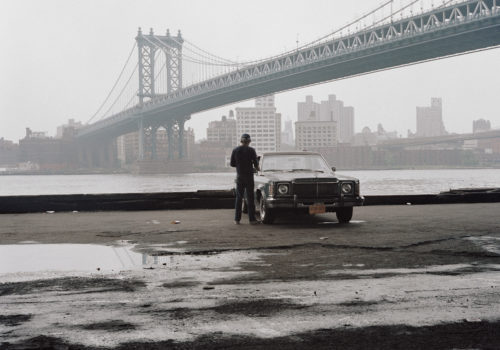 EUQINOM Gallery presents New York in the 80s, an exhibition of photographs by Janet Delaney. The exhibition is timed to coincide with the book release from Mack Books, titled Red Eye to New York.

In the 1980s Delaney worked in a photography lab in San Francisco and from time to time, she would be a courier for the lab, to New York. In the morning light, she would wander with her twin lens Rolleiflex through Chinatown, across Canal Street, into SoHo and beyond 14th. Mesmerized by the depth of history embedded in the city’s buildings and the embrace of the cross pushing past her. Despite being tired and often lost, the act of photographing made Delaney feel present and alert, in tune with the crowds and mesmerised by the depth of history woven into the city’s structures. The colour photographs that make up this series reveal the formation of her generous approach to photographing streets and the people who inhabit them, capturing the precious mixture of private lives lived in public and transient moments of connection between photographer and subject.

Janet Delaney (b. 1952; Compton, California) is a photographer based in Berkeley, California. She received the 2020 Guggenheim Fellowship and other numerous awards, most notably three National Endowment for the Arts Grants. Her work has been the subject of national and international group and solo exhibitions, including South of The Market, at the de Young Museum, San Francisco in 2015. Her photographs are found in the collections of the San Francisco Museum of Modern Art; The Oakland Museum of California, Harry Ransom Humanities Research Center at the University of Texas; Pilara Foundation, San Francisco; de Young Museums of San Francisco; Museum of Modern Art, Rio de Janeiro; and the Bancroft Library at the University of California, Berkeley. Delaney released her third monograph in 2021, Red Eye to New York, published by MACK. Her prior books include South of Market (MACK, 2013) and Public Matters (MACK, 2018). She received her MFA from the San Francisco Art Institute, and was a lecturer and professor in photography throughout the Bay Area, University of California, Berkeley and San Francisco Art Institute.