Eugene Richards: The territory of the destitute 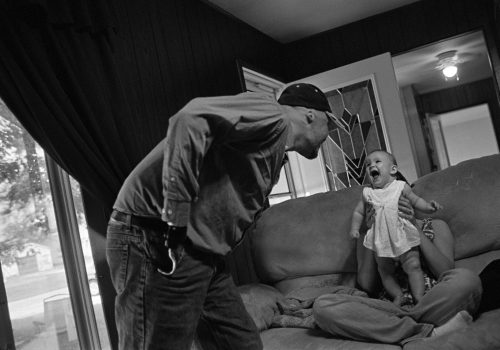 For over forty years, the photojournalist Eugene Richards has been tracking social deprivation, suffering, and death. La Grande Arche de la Défense in Paris holds a vast retrospective of his work.

The steeple is on the verge of collapse. Tiles are hanging by a thread and the woodwork seems gnawed away by time. In front of this abandoned church in Arkansas a dog is playing next to a neglected grave… The photograph sums up Eugene Richard’s work, which sheds light on places full of despair and the world of the poor.

Because he didn’t want to go to war in Vietnam in 1969, Eugene Richards joined the civil service. He went to work for VISTA (Volunteers in Service to America) and took part in the creation of a social service organization and a local newspaper in Arkansas. For the budding photographer, this was a precious source of countless faces of pain.

A man freshly released from prison sheds big tears and breaks down in the arms of his girlfriend. This black-and-white portrait is shot frontally—Eugene Richards’s signature view. The photographer clings to his subject, foregrounding the violence of the situation he captures. In the United States, he mingles with those living on the margins and crammed in filthy squats. He photographs crack addicts and police raids, which provoke laughter among the residents of this dilapidated neighborhood, too used to drug squads to take them seriously. Addicts groping in the dark in a dingy room are juxtaposed with drug kingpins immortalized by Eugene Richards hoisting guns and assuming intimidating postures.

Stepping through the gates of poverty and suffering, the photographer naturally gravitated toward sickness and death. He visited a hospital in a low-income district, capturing tragic scenes, like the corpse of a young woman, a waitress at a local restaurant, shot by a drunken customer and laid out on a gurney. In Mexico and Paraguay, Eugene Richards went inside psychiatric hospitals. He brings us face to face with the distress of the mentally ill, forgotten by their country, abandoned to filth and brutal treatment. An autistic teenager is locked in a cage. The caption explains that he’s lived in this hole for six years.

Heartbreaking and unflinching, Eugene Richards’s photographs also speak of his passion for those we tend to forget. This is reflected in his series about American soldiers wounded or killed in Iraq. Richards photographed their injured faces: a soldier who was made paraplegic by a bullet lodged in his spine, another who had half his skull blown off, another who suffered burns to both hands and face. The photographer shows them at home, surrounded by their loved ones. Sometimes he photographs the families of those who never came home. He photographs the funerals: a child climbing a tree in order to catch a glimpse of his father’s gravestone in the middle of a military cemetery.

Tackling painful subjects, the photographs rarely admit a glimmer of hope. Although Eugene Richards mostly photographs the faces of suffering, he knows how to take lovely portraits of children, which break up the darkness. A little girl in Brooklyn is bathing in an inflatable swimming pool in front of her building, attracting a pack of boys who gather round to watch her. Another girl is playing with a doll, and a group of kids tinker with the hood of an old pickup with a broken windshield. They all have dreams, and it seems it’s ok to hope.