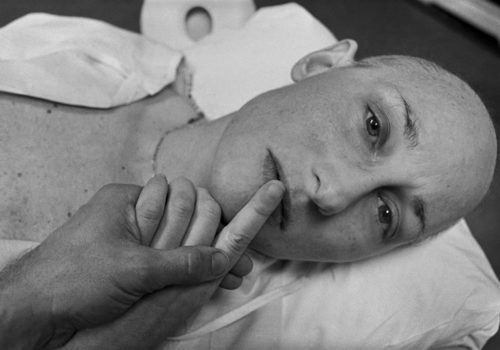 The George Eastman Museum, in Rochester, NY, is the first museum to dedicate a retrospective to American photographer Eugene Richards.

Photographer Eugene Richards is widely respected and internationally renowned for the integrity and power of his work, which is deeply informed by his dedication to social and economic issues. For the past several decades, he has explored complicated subjects such as racism, poverty, emergency medicine, drug addition, cancer, the American family, aging, the effects of war and terrorism, and the depopulation of rural America. The Run-On of Time, an exhibition co-organized by the George Eastman Museum and the Nelson-Atkins Museum of Art, explores Richards’s career as a photojournalist and documentary photographer from 1968 to the present. On view at the Eastman Museum June 10–October 22, it is the first museum retrospective devoted to his work.

Until now, Richards’s work has been known primarily through international news and media outlets, for which he created images on assignment, or through books, wherein he delves into his subjects further using his photographs and first-person texts. Through 146 photographs and selected moving image works, this exhibition provides a fuller understanding of Richards’s career, demonstrating how his personal artistic vision draws on the legacies of W. Eugene Smith and Robert Frank to address the salient social issues of our time.

Born in Dorchester, Massachusetts, Richards began to photograph seriously while taking classes from Minor White at Massachusetts Institute of Technology after graduating from college. During the Vietnam War, Richards refused the draft and joined VISTA (Volunteers in Service to America), working as a health care advocate in eastern Arkansas. Later, he cofounded an organization that published a newspaper, Many Voices, devoted to informing black communities of their rights as voters and citizens. Deeply affected both physically and emotionally by the poverty and racial violence he witnessed, Richards found a purpose for his photography. The photographs he made in Arkansas during this period resulted in the publication of his first monograph, Few Comforts or Surprises: The Arkansas Delta (1973). Beginning with this modest yet powerful publication, Richards has used the book format as the primary vehicle for his personal documentary work, publishing more than seventeen monographs throughout his career.

This exhibition presents photographs from all of Richards’s major bodies of work, including Dorchester Days (1978), a study of life in a south Boston neighborhood; Exploding Into Life (1986), a chronicle of his first wife’s battle with breast cancer; Below The Line: Living Poor in America (1987), a documentation of urban and rural poverty; The Knife & Gun Club: Scenes from an Emergency Room (1989); Cocaine True, Cocaine Blue (1994), an in-depth exploration of the social toll of drug use; Americans We (1994), a poignant collective portrait of American family life; Stepping Through the Ashes (2002), pictures of New York in the days after September 11, 2001; and The Fat Baby (2005), an anthology of fifteen photographic essays. His recent projects will also be represented, with photographs from The Blue Room (2008), a poetic meditation on abandoned family farms in the Upper Plains; A Procession of Them (2008), about his visits to psychiatric facilities around the world; War Is Personal (2010), consisting of empathetic yet unsparing portraits of individuals who experienced the Iraq War firsthand; and Red Ball of a Sun Slipping Down (2014), a reconsideration of his first mature body of work in the Arkansas Delta.

Eugene Richards’s photographs speak to the most profound aspects of human experience: birth, death, and the grinding effects of systemic poverty. His style is unflinching yet poetic, and his photographs are deeply rooted in the texture of lived experience. Through his photographs, writings, and moving image works, Richards confronts challenging subjects with an impassioned honesty that can be simultaneously controversial, lyrical, beautiful, and melancholy. Ultimately, Richards’s photographs illuminate aspects of American society that might otherwise remain hidden in plain sight.