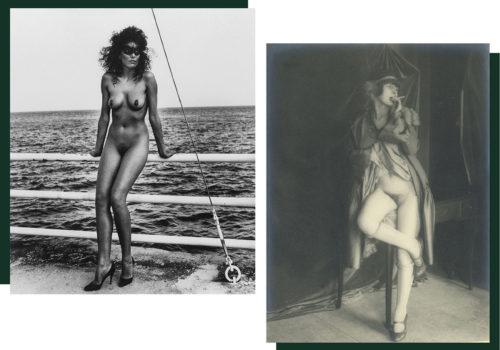 This is the sixteenth dialogue in the Ettore Molinario Collection. A dialogue dedicated to that stage of voluptuousness and feminine personality that shoes represent. Heeled shoes, of course, photographed by Monsieur X and Helmut Newton, extraordinary masters, one anonymous and the other world-famous, who, even without ever having met, would have understood each other immediately. They were both women and shoes lovers. And walking together with their creatures, we wish you happy holidays and look forward to seeing you in September for our new appointments.

Originally, high heels were for men. A convenience that allowed safer grip on the stirrups on horseback. A privilege, because kings were entitled to the height of the throne even when walking, a carmine-coloured throne to be precise, like the red heel that raised the stature of Louis XIV. This game of stilts and waders would have continued wonderfully if Napoleon in 1804, on the occasion of his coronation as emperor, had not preferred flat shoes to the more aristocratic rise. And yes, the man was small, but his ego definitely didn’t need Ancien Régime tricks.

For women, heels were used above all to protect clothes from mud, but even with respect to this simple device, the Neoclassical had preferred to impose plantar humility. Fortunately, everything changes in the Victorian era and changes because, since 1839, photography has recorded the return to shoes of greater height. Faced with the realism of the lens, those foot prostheses lengthen the lines of the body and make them more beautiful and desirable. Undress a woman, yes, discover her in her recesses too, but the shoes must remain. Also for another reason, as the mysterious Monsieur X, a member of the French upper middle class, had well guessed, who in Paris in the 1930s loved to portray the girls of a Pigalle maison close. Never full nude, what a banality, but always a coat on very light skin, a silk shirt, a hat and always shoes, even where the open legs show the origin of the world, because it is the shoes, accompanying every step in everyday life, to give truth to women’s bodies and the desire they arouse.

Not even Helmut Newton, who grew up in the 1930s in Berlin, in the city that made women wear every perversion, would have renounced black, shiny, stiletto shoes, because he wanted to talk about real women and about real feminine power, in spite of the protests that his images raised each time. And so even under the sun of the Monte Carlo Riviera, Newton, who loved the gaze of Franz Rehfeld, Brassaï and Charles Guyette, offered his amazons the most dizzying décolleté. A mask to make night during the day, hair disheveled not only from the wind, high heels, and desire could walk safe and satisfied. And the Cinderellas, armed with the feigned modesty of low shoes, unreal for lack of seductive power, would stay home, by the fireplace.