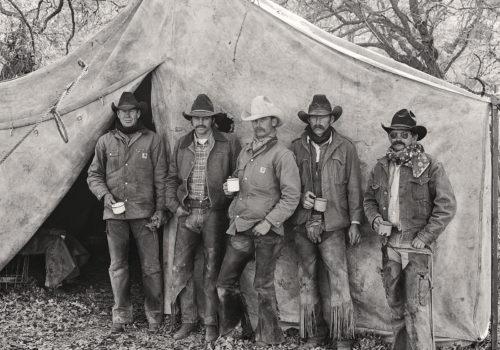 Etherton Gallery presents the work of one of the most influential photographers of the American West, Jay Dusard, in their new summer show, Jay Dusard: Cowboy with a Camera.

Cowboy with a Camera features a selection of monumental scale, cowboy portraits most of which were made during 1980-1982. In 1981, Jay Dusard was awarded a Guggenheim Fellowship and embarked on an epic adventure, photographing the working cowboys and women of North America. Over a period of two years, he traveled 25,000 miles with an 8 x 10 inch view camera, and rode and photographed at 45 ranches in the United States, Canada, and Mexico. The project was published in 1983 as The North American Cowboy: A Portrait.

Larger-than-life, and filled to the frame with the textures, details and locales of ranching life, images like Julie Hagen, Wagstaff Land & Cattle Co., Wyoming, 1981, and Bill Moorhouse, Bob Phillips, Jeff Shipp, Jack Bowlin and Jerry Brashears, ORO Ranch, Arizona, 1980 have an authenticity that comes from a working knowledge of life on a ranch.

A farm boy, Dusard had ridden and “followed” cows since childhood. Following his discharge from the Army in 1963, he did a brief stint on a ranch near the Arizona-Sonora border and fellow in love with ranching and southern Arizona. He immersed himself in ranching life and photographed his subjects from the inside. As he said in a 2020 interview, “If I was part of it, the people I was photographing would trust me. They’d be more comfortable when the camera came out.”

Dusard’s portraits also reflect a sophisticated understanding of photography. He studied with the influential photographer Frederick Sommer, and considers him his mentor. Dusard positions his subjects directly in front of the camera, carefully choosing locations that emphasize their work as ranchers. His images have an almost tactile quality, and strike a balance between the physicality of the men and women in his photographs, and the abstract, graphic quality of the background details, which highlight the “landscape” in which they operate. The resulting images are both formally beautiful and powerful testaments to a way of life that has all but vanished. We are all the richer for his longstanding, passionate engagement with this world.

Originally from Saint Louis, Missouri, Jay Dusard graduated from the University of Florida with a degree in architecture. A travel scholarship introduced him to the American West. Following his discharge from the Army in 1963, he worked for a ranch on the Arizona-Sonora border. He began photographing in 1965, and with the support of Frederick Sommer, taught photography at Prescott College in Arizona for seven years. In 1981 he was the recipient of a Guggenheim Fellowship, and the resulting body of work was published in The North American Cowboy: A Portrait (1983). This publication was followed by several other noted publications including a collaboration with writer Alan Weisman, La Frontera: The United States Border with Mexico (1986). In 1994 he published a second book of photographs, Open Country and collaborated with writer Dan Dagget on Beyond the Rangeland Conflict: Towards a West that Works, which was nominated for a Pulitzer prize. In 2005 he published Horses with writer Thomas McGuane. He was also the subject of a documentary directed by Michael Markee. Dusard’s photographs are in several private, corporate and public collections including: the Phoenix Art Museum, Glenbow Museum, Calgary; Colorado Springs Fine Arts Center; Consejo Mexicano de Fotografia, Mexico City; Art Museum of South Texas, Corpus Christi, Texas; the Center for Creative Photography at the University of Arizona, Tucson; Tucson Museum of Art; Los Angeles County Museum of Art; and Charles M. Russell Museum, Great Falls, Montana. His archive is at the Booth Western Art Museum in Cartersville, Georgia. Jay Dusard has lived on a ranch near Douglas, Arizona for almost five decades.