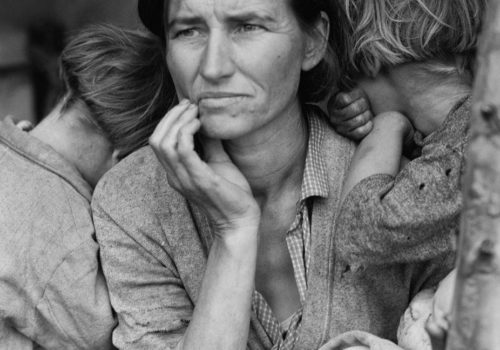 The world and its representation have been continuously changing during the last 100 years. And photography reported about these events through shots enclosing an almost infinite series of significant moments, like they were time capsules. The exhibition Essere Umane. Le grandi fotografe raccontano il mondo (Being human. The world through the eyes of great women photographers) at the Musei San Domenico in Forlì, narrates precisely a century of history through the images of thirty great professionals, that managed to put together a huge fresco of the recent past and of our time”, curator Walter Guadagnini explains.

“Essere Umane is a story made of fragments: it does not claim to be exhaustive, but it may provide – simultaneously – an individual and a collective overview of a significant part of our history”, he says. “The fresco consists of 310 fragments/photos, which lead us in a sort of time travel, a journey through history composed of three sections (1930s to 1950s, 1960s to 1980s, 1990s to the beginning of the current century). Women photographers used to be and still are at the forefront to vigorously document these events. Thus, photography turns in something different: it’s not only an evidence of a certain moment, but also an instrument of knowledge and a tool for investigation and reflection on the great issues of the last century”, Guadagnini adds. This ideal fresco also deals with the evolution of the photographic language: since the 1930s, thanks to the success of the first illustrated magazines, photography became the main language of contemporary communication.

Among the images on stage: the series of masks by Inge Morath, made with Saul Steinberg, the iconic work Dorothea Lange shot during the Great Depression for the Farm Security Administration and the portraits Annie Leibovitz shot for the 2016 Pirelli Calendar, the images by Lisette Model from the Reflections series, investigating the American consumerism issue and the ones by Margareth Bourke-White, the first foreign photographer allowed to take photographs in the Soviet Union.

Essere Umane is a chance to also see the pictures on African-American women’s fashion shows in Harlem by Eve Arnold (the first woman together with Inge Morath to be part of the photographic Magnum agency), the ones by Gerda Taro on the Spanish Civil War, the images by Diane Arbus and the ones by Graciela Iturbide, from the series devoted to the matriarchal community of Juchitan (Mexico). And then, the images by Carla Cerati, Lisetta Carmi, Letizia Battaglia, with her photos dedicated to little girls in Palermo and to the mafia murders. Furthermore, Newsha Tavakolian, a member of the Magnum agency, with her work on women-guerrillas of the Farc (Revolutionary Armed Forces of Colombia), and Shadi Ghadirian with her images dedicated to the difficult condition of Iranian women. The exhibition concludes with the photos from Afronauts by Cristina De Middel (reconstructing the adventure of the first, unofficial and unauthorized, space program of Zambia of the 1960s) and an installation by Silvia Camporesi, composed of images taken during the lockdown.

The exhibition Essere Umane allows us to discover the world thanks to the work by the greatest women photographers who dealt with major issues, like the economic crisis of the 1930s, the Second World War and the post-conflict reconstruction, the consumerism, the social changes, the anti-discrimination fight, the feminist conscience and the gender awareness, thus composing the comprehensive and complex fresco of the last 100 years, Guadagnini was talking about.