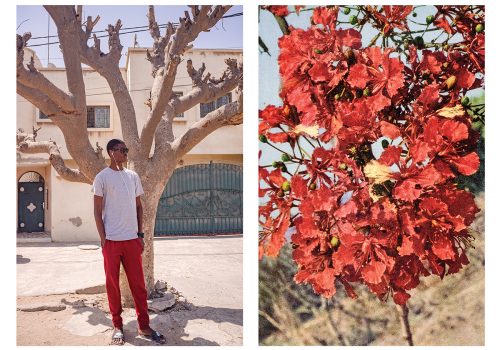 It was a Conseil des arts et des lettres du Québec (CALQ) residency at Dakar’s Village des Arts in 2019 that gave birth to the series Gàncah bu naat* (pronounced Ganthiak boo naat, and translatable as The Flourishing of Flora). Having as its starting point photographic research on the last trees that “resist” in the cities of Senegal, this series freely interprets the diversity of the relationships between city-dwellers and trees. Made up of diptychs and triptychs, the color series lets the artist’s photographs taken during her residency poetically resound alongside the photos of botanist Jean Berhaut (1902-1977), drawn from his work Flore du Sénégal (Flora of Senegal).

In Senegal, a country whose national emblem is the baobab, trees are sacred, repositories of culture and spiritual values. Nevertheless, they rank first among victims of forced-march urbanization, of rampant pouring of concrete, particularly in the Dakar area. Trees are at one and the same time lungs, sunshades, raw material, energy source, a resource that people cut, that people paint, that people hang merchandise from, but also refuges, like those trees in the botanical garden on Dakar’s university campus where students come to find concentration and inspiration, sheltered from the depravity of the city. Gàncah bu naat pays tribute to the beauty and the resilience of trees, inviting viewers to project themselves into a dreamlike world where subtle harmonies are forged among the shapes and colors of the world of the living.

*This title in Wolof, the national language of Senegal, was suggested by Assane Ndoye, a cultural entrepreneur and environmentalist based in Rufisque.

A historian and photographer by training, Érika Nimis has since the mid-1990s been developing a practice halfway between documentary and poetic essay. Her work in color embodies her interest in the traces of the past in the present, especially in places and things that have been abandoned or are forgotten, at first glance invisible. In 2018 she began a long-term project on a number of palimpsest sites in Dakar, the capital of Senegal. In May of that year a first body of work was presented at Dak’Art, the Biennale of Contemporary African Art. In 2019 she returned to Dakar for a residency at the Village des Arts on urban trees. Érika Nimis is a member of the collective of female visual artists La bête à têtes. Associate professor of art history at Université du Québec à Montréal, she is also known for her work on the history of photography in West Africa.