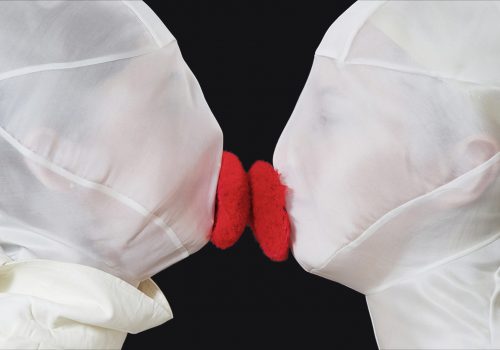 Invited by the haute couture house Aganovich, the American photographer Erik Madigan Heck directed the short film Le Grand Cirque. Released during the 2020-2021 online fashion week, the film was designed to compensate for the lack of fashion shows due to the Covid-19 crisis.  It was inspired by the collection “The Anxiety of Influence” from Aganovich and refers directly to Alexander Calder’s eponymous circus films made in 1950.

“The world works in mysterious ways, but it really doesn’t. I believe if you are in tune with yourself and the nature of the ebbs and flows of life, all things make sense and probably happen for a reason. Last November I flew to Paris and photographed Aganovich’s last Couture collection because I believed that it was the ultimate articulation of what they have strived for in their career- I just wanted to be a part of it, and add to it with my own language. There was no money exchanged, just a desire to be a part of the world they created- a world I long for and miss in fashion today. Aganovich and I have been dear friends for many years now, and I truly believe they are one of the last remaining brands who operate on the old world’s terms for fashion- a world I grew up with and would describe as slow fashion- it’s emotional… they create a world that makes you dream and isn’t based on consumption. After the shoot we  never did anything with the photographs, they just got lost in our lives; we parted ways and life took over.

Last week, four days before Nana called to ask if I could create a video for their Haute Couture collection, I had written down in my journal a note that I wanted to create an animation with the photographs we made last year, the photographs that had been sitting dormant all this while- and then the phone rang, as if my pen was writing them to call me. I don’t believe in coincidences. I understand that sometimes things need time and need to be shelved, and eventually they will come to life when the time is right. This animation is a re-looking at something we made at the end of last year when the world was less volatile, and yet, the photographs were made in the most volatile state- a frantic day of creating a make-shift studio inside of their atelier in Paris. Brooke & Nana worked and carried on as if nothing was happening, while the photoshoot was an interruption in their physical space, and while ultimately at the time the making of the images had no inherent purpose, they were made just because I felt compelled to document this collection. The photographs needed to wait until they could find harmony with the world, and now that our world has entered a phase of pure chaos I believe they finally make sense, and not as photographs, but strung together as an animation.”