Emporio Armani – The Way We Are. 40th Anniversary (and the role of photography according to Giorgio Armani) 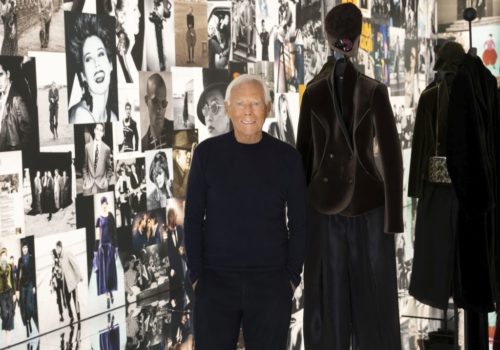 “Photography, whatever the subject, always arouses in me an emotion, often associated with the personal relationship that exists between the photographer and the point of view they express”. (Giorgio Armani)

As a matter of fact, photography surrounds the content of the exhibition Emporio Armani – The Way We Are and, at the same time, it is within its core. The exhibition, personally curated by Giorgio Armani, narrates the egalitarian spirit of Emporio Armani looking back on the history of an experience that was then a revolution in fashion and costume. In the sign of the eagle.

It was 1981 when Emporio Armani was created to make fashion accessible to all, with the Armani imprint. No manifesto was then necessary, while the exhibition at Armani / Silos in Milan is an ex-post manifesto on four decades of an innovative and transversal brand.

A scenography where the multiplication of the mirrors to infinity welcomes visitors and wraps them in sensations, in a phantasmagoria of images along with the stories they tell. THE WAY WE ARE, besides the garments and accessories, uses photography as an icon of the exhibits, as language and sign. At the same time, the objects featured in the exhibition support and provide photos with still greater meaning.

“Photography, whatever the subject, always arouses in me an emotion, often associated with the personal relationship that exists between the photographer and the point of view they express. As I grew, of all the visual arts, photography is the one I was actually drawn to first. I used to take pictures of my sister, who modelled for me. That was how I secured my first job in fashion – when I took some pictures I had taken of her to show to a woman at Milan’s department store, La Rinascente. She offered me a job as window dresser and discarded the photos. But my interest in photography endured, and it was something I shared with my sister Rosanna. Together, in 1988, we launched the Emporio Armani Magazine. The goal was to communicate the world of Emporio Armani through the use of photographs, with the strong idea and emotions that were at its base. The real stars were the garments, which were “interpreted” by great photographers who managed to keep their spirit and identity intact. And whichever artist I worked with the end result always fully representing my aesthetic. This exhibition showcases Emporio Armani’s unique imagery and iconography developed throughout the years, one that came to define a distinctive photographic style. I wanted it to be modern, intense, and cinematic, while at the same time casual, a style where emotion is suggested through subtle facial expressions and body language. I’ve always thought that fashion photography is an art and an effective and powerful means of communication. Because it can not only be beautiful, but it is also capable of creating excitement.”

Indeed, THE WAY WE ARE engages visitors since its beginning with a declaration covering the entire entrance wall, followed by a series of rooms to be explored, each expressing distinct values, ideas, aesthetics, words and worlds, images and imagery: from accessories to a style that is egalitarian for both him and for her, from Milan to the world as well as to the pages of the Emporio Armani Magazine, retracing the past to deal with the present. After all, the manifesto reads: “Within an EMPORIO, (an emporium), there are no limits of time or space. An EMPORIO acts as a container, an encyclopaedia, an algorithm. An EMPORIO holds everything, for everyone, at all times. (…) EMPORIO ARMANI is all of this, under the banner of the eagle. (…) It is pragmatism and imagination (…)”.

The Armani/Silos spaces are occupied by giant photographs, as oversized has always been the brand’s communication key (the huge billboard of the Emporio in via Brolettoin Milan has become a landmark of the city and a way to communicate with it). Then: mood boards, videos and clothing. And people are invited to take part in the manifesto/exhibition, experiencing it by walking through and experiencing an almost infinite number of garments and photos, films and emotions displayed in the rooms.

“Emporio Armani was born far ahead of its time. I imagined it as a line with which to experiment, capturing new trends and introducing fashion for all; a container in which everyone can find something and make it their own, interpreting it in a personal way. Today it represents the cross-cutting and dynamic version of my concept of style and has not lost its initial spirit of individuality and community, of research and freedom”, Giorgio Armani adds. All these values are emphasized with this exhibition (which, by the way supports Save the Children’s education projects).

EMPORIO ARMANI – THE WAY WE ARE