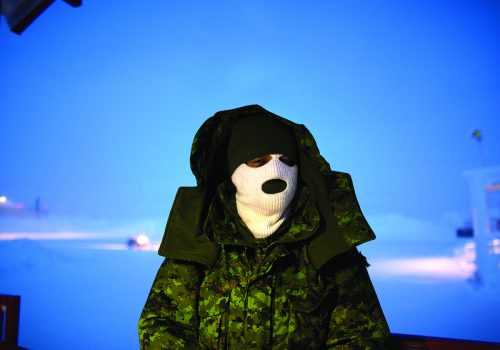 Deployment presents a body of work undertaken by Emmanuelle Léonard in 2018 during a research residency in the Canadian Far North sponsored by the Canadian Forces Artists Program. A continuation of the artist’s photographic and videographic projects from the past fifteen years, which focused on the hierarchies that form within social, judiciary, military and religious systems, this group of works pursues her interest in the function of authority and the mechanisms by which it is circumvented or undermined.

Observing the exercises conducted to assert Canadian sovereignty in the Arctic, Léonard discovered a diverse set of realities: strategic military deployment in a region of the world where the national, political and economic stakes have been raised by global warming; young adults committed to the collective values of the army while remaining intent upon their own personal quest; the Inuit Rangers, without whose contribution it would be useless to attempt to learn how to survive in such cold; the innocence of the soldiers’ awe before the grandeur of the northern landscape.

Despite conditions that make filming extremely difficult, Léonard captured the activities of soldiers shielded against the cold by clothing, facemasks and goggles that make them appear at times spectral and anonymous, at times very real and individual. Turning her attention to training exercises that level identity as well as to the participants themselves – their perception of the world independent of the military model – the artist witnessed the waiting and the relative passivity of soldiers confronted with motors that refuse to start in the northern night that is so disquietingly slow to fall, if not entirely eclipsed, where nothing momentous is said, done or claimed.

Born in 1971 in Montreal where she lives and works, Emmanuelle Léonard holds a master’s degree from Université du Québec à Montréal. Her work has been shown in numerous solo and group exhibitions, including at the Musée d’art contemporain de Montréal, OPTICA, VOX, Galerie de l’UQAM and Mois de la Photo in Montreal; at Kunsthaus Dresden and Neuer Berliner Kunstverein in Germany; at Mercer Union and Gallery 44, Toronto; at Glassbox, Paris; at L’Œil de poisson, Québec City; and elsewhere. She has participated in artist residencies at Villa Arson, France, the Christoph Merian Foundation, Switzerland, and the Finnish Artists’ Studio Foundation, and was presented with the Pierre-Ayot Award in 2005. She was featured in a 2012 exhibition at the Art Gallery of Ontario (AGO), Toronto, in the proceedings of the International Grange Prize, for which she was nominated, and in 2013 at Le Fresnoy, France, as part of the À Montréal, quand l’image rode exhibition, curated by Louise Déry.