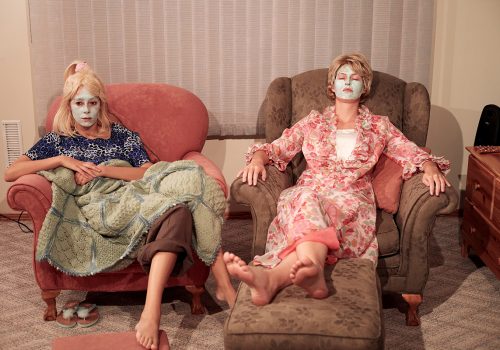 For the Brussels Gallery Weekend 2020, the Galerie La Forest Divonne offers an immersion into the universe of Elsa & Johanna, a duo of photographers and film directors.

In 2017, just graduating from the Beaux-Arts and Decorative Arts in Paris, the two artists covered a huge wall of the gallery with 36 portraits of young men and women, couples, friends. 36 stories, 36 destinies which they embodied in turn, because the two young women are always the models of their own photos. It’s hard to recognize them, however, in this generation-long album entitled “A Couple of Them”, so naturally they slip into the skin of the characters they create, true to life. One would swear to have passed them by in the street.

Elsa & Johanna, return to Brussels with their first solo show in Belgium: “Silver Springs”. This is the name of a residential neighborhood in Calgary, Canada, where in 2018 they produced the images they now call “Beyond the shadows”. It could be the name of many other outlying North American neighborhoods. Places of expectation and solitude, a decor without character you might say, and yet it triggers our imagination and our emotions at first glance.

For this series, Elsa & Johanna are happy to leave the portait format for the landscape format. While continuing to forge characters, they place more emphasis on “stories”: the ones they imagined when they were shot, but especially the ones we imagine when browsing their photographs. Fragmented stories, whether we could start with this photo or this one a little further down and build an ever different narrative. Elsa & Johanna would thus suggest that there is not a single reality, a single interpretation but as much truth as there are looks. And this conception is embodied in the hanging they offer, which readily alternates formats and heights, like a kaleidoscopic view or a burst of memory.

To put up a smoke screen and complete the immersion in the stories they offer, Elsa & Johanna gladly add to their exhibitions colored carpets, repainted walls, tinted windows or scattered objects, among some antique furniture. They demonstrated this brilliantly during the Rosarium exhibition, at the Center Mains d’euvres de Saint-Ouen in Spring 2019. At the Galerie La Forest Divonne, a few carpets and furniture interventions will thus reinforce the immersion in ” Silver Springs ”.

Johanna Benaïnous (1991) and Elsa Parra (1990) form a duo of visual artists, photographers and film directors. They met at the School of Visual Art in New York and received congratulations from the Beaux-Arts de Paris (ENSBA) jury in 2015. Invited to the Salon de Montrouge in 2016, they were invited artists to the Circulation (s) Festival and at the Saint-Germain Photo Festival in 2017. In 2018, they entered the collections of the City of Paris (Municipal Contemporary Art Fund), the Palais Galliera (the City of Paris Fashion Museum) and the Department of Seine-Saint-Denis. in 2017. In 2019, they won the Public and City Prize at the Hyères International Festival. They are scheduled in Arles 2020, as part of the Louis Roederer Discovery Prize, which will finally be presented at the Laennec Chapel (Paris) in November, and in Jimei (China) from November to January.