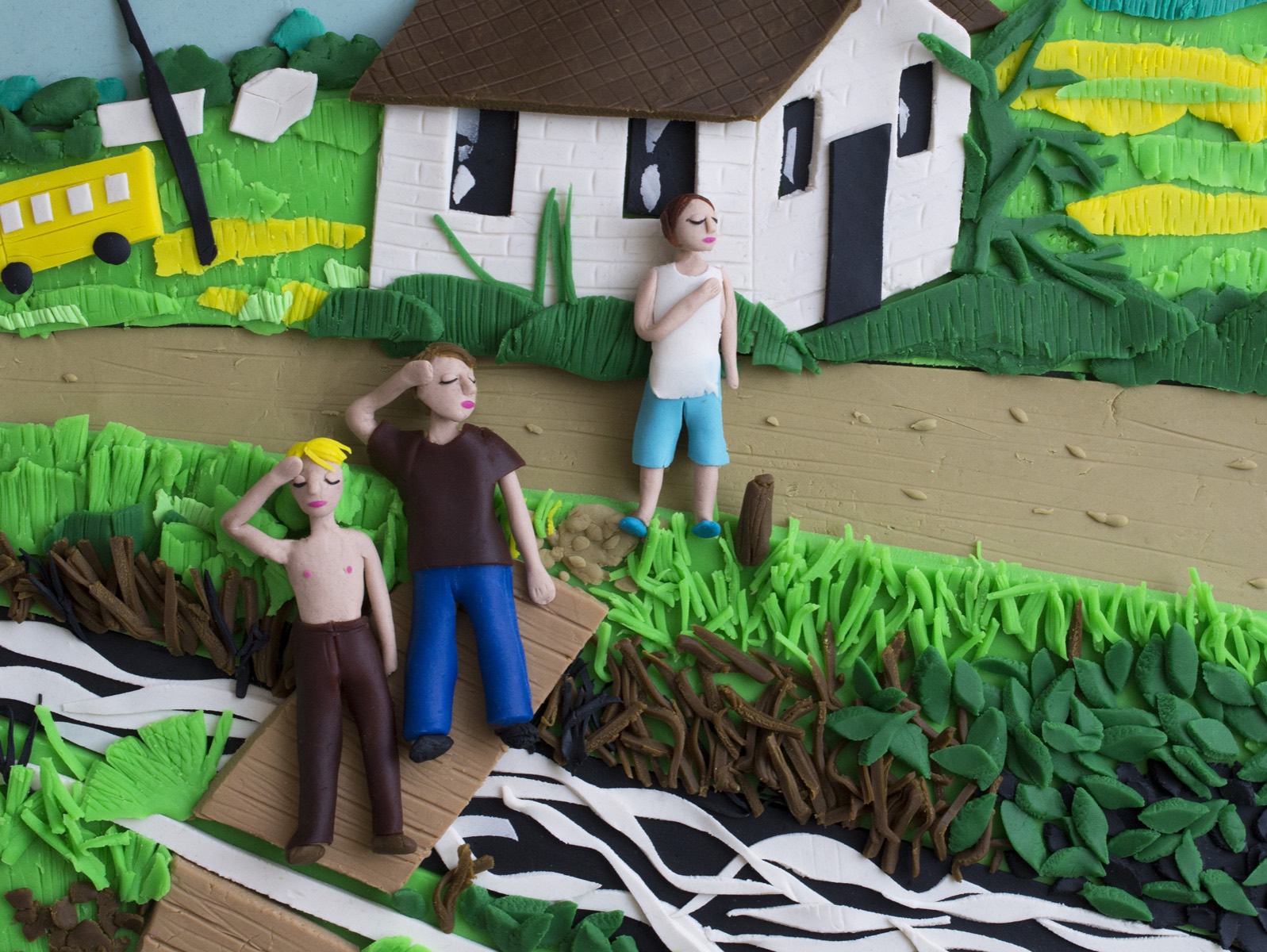 The photographs I’ve recreated in Play-Doh to celebrate the 70th anniversary of Magnum Photos are a personal selection from the hundreds of thousands of photographs created through the agency’s history. I knew that any selection I made could not attempt to be definitive, nor the ‘best’ of Magnum, so I chose a small number which mean the most to me, often for very personal reasons, which I’ve explained below.

Like a magpie, I’m constantly hoarding and collecting images; presented here are some I’ve had in mind for some time and others researched especially for this project. Some of my favourite photographs I’m not able to reproduce – either because they are too complex with too many figures, their subject matter isn’t appropriate for the medium, or their strength lies in their subtlety; Play-Doh is not a subtle medium.

My hope is that in recreating these images, I encourage those familiar with Magnum to look again at well-known photographs, and for those who are new to the history of the agency to discover these images the first time… and perhaps go on to find favourites of their own.

I selected Empire State Building (1955) by Elliott Erwitt as I lived in New York as a young adult and this image has always summed up some of my feelings about the city, its vastness, romance and possibilities. And also the loneliness. Rather than depicting the city with its sea of people, Elliott photographs a lone figure with the city as the backdrop. The image is originally black and white and one of the challenges of translating into color is to make this work without drawing too much attention to the change. I chose to make the hat red, marking the individuality of the human figure against the muted tones of the cityscape.

Another New York photograph I included in my selection was from Bruce Davidson’s Subway series—you can almost hear, smell and feel the subway. I was interested to see if there was some way to translate the extreme contrasts of shadow and color from the original photograph into Play-Doh. I chose to try to remake an image of two young lovers… a glimpse of tenderness and humanity amongst the grit and the noise of the subway.

Growing up in the UK and remembering seaside holidays, I’ve always been drawn to Martin Parr’s The Last Resort. The children in the photograph I recreated are so engrossed in the world around them that there is a trail of ice cream down their legs and on the road. The original photograph seemed perfect for Play-Doh as the colors mimicked that of an ice cream – the pink of the paving slabs and the pastel blue of the children’s clothes. Another British photograph I included in this series was a shot of two Teds standing in front of a wall taken in Southend, 1977, by Chris Steele-Perkins. I’ve always been fascinated by photographs documenting sub-cultures and although this isn’t one of Steele-Perkin’s best-known photographs from this project, I love its simplicity— it highlights the fashion and style, and most importantly, the attitude.

I’m often drawn to photographs that intrigue me and Girl with Balloons by Thomas Dworzak, is one such example. The contrast between the signs of conflict in the landscape and girl’s colourful balloons is striking, alongside the ambiguity of the girl’s gesture of covering her face with her hands… is this a gesture of horror and upset, or a playful response of shyness, attempting to hide from the photographer? Similarly, Newsha Tavakolian’s photograph, Imaginary CD cover for Sahar, has always intrigued me. Who is the figure in the sea and what is she looking at? I wasn’t, at first, aware of the context of this series by Tavakolian, which focuses on women singers who are not allowed to perform solo or produce their own CDs due to Islamic regulations in Iran. Even without this context I was drawn to this image as it seemed timeless; the lone siren in the sea, a symbol of both beauty and danger.

Alessandra Sanguinetti’s series The Adventures of Guille and Belinda has always enchanted me and so I had to include one from this project. It speaks to me of those intense, close friendships you can only have as children, where the imaginary co-exists with reality. Another favourite series of mine is Funeral train by Paul Fusco, taken after the assassination of Robert F Kennedy. Rather than showing the obvious—the formal stately funeral —Fusco has turned the other way, to the backyards of America from a moving train, to portray a nation in mourning. I love the sense of movement and the light, something which is impossible to replicate in Play-Doh. I chose this photograph due to the gesture of the two boys with their hands raised in solemn salute: a gesture on a sun-dappled idyllic day that Robert F Kennedy would never see, immortalised in this image

I included Jim Goldberg’s photograph Prized Possession (#2) because when I was growing up I had a mint green radio cassette player which, for some time, was a prized possession. My radio cassette player was to listen to music, and Goldberg’s subject, Wembe, used his radio to listen for good news from his refugee camp. Our circumstances were worlds part – but I felt that there was something universal in this photograph: our shared desire to listen to words or music from afar.

Finally, I’m a big fan of Alec Soth and so was keen to include one of his photographs. However, many of his landscapes and interiors have a subtlety that wouldn’t translate into Play-Doh. In the photograph I recreated from Niagara, I was first struck by the perspective, looking down at the couple, but more than that, although the setting in the grass is idyllic and they look to be in love, there is an inherent sadness, or perhaps a world-weariness, in their gaze.

Eleanor Macnair photos are available for sale at: