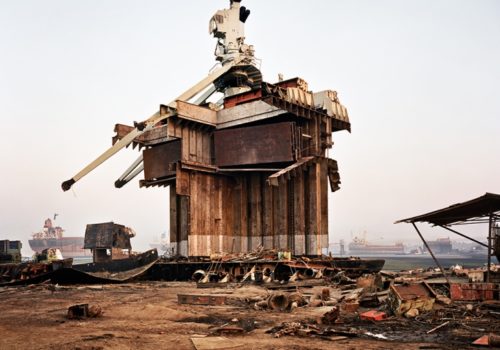 Edward Burtynsky is a Canadian photographer whose many projects show the effects of human, especially industrial, activity, on the environment across the globe, in the cities as well as in the countryside. His new series Salt Pans, produced in 2016, is the opportunity for the Howard Greenberg Gallery to present this photographer’s work in a double form with  this exhibition and with a retrospective.

His latest work, Salt Pans, is composed of aerial views taken at altitudes between 150 and 250 metres whose angle modifies perspective: these are neither vertical views not low-angle shots and we don’t know where we are or what we are looking at, it is the title and the explanatory text which clarify this for us. It is the salt production industry in the Rann of Kutch in Gujarat, centuries old production in this part of India, which is known to be a desert salt marsh. The photographs are almost abstracts but we recognise Edward Burtynsky’s obsession for the marks left by man on the territory: the landscape is punctuated by geometric shapes, stains of ochre and blue, tracks on the grey earth, the remains of ancient saltworks. It is very beautiful, but we ask ourselves about the tension between the aesthetic stance and the anthropological ambition that is not, in the end, very clear.

It is the same dialectic that animates the rest of the exhibition and Essential Elements offers a selection of images from 1981 to 2012. The themes and subjects are similar since we find the same attention to the modified landscape and this concentration on the line and the curve. The images are less abstract, some are more frontal, more luminous and, moreover, it is without doubt  when Edward Burtynsky is less verbose , his photographs gain in density, and we gladly let ourselves be swept up in them.

Hugo Fortin is a photography critic based in New York.

Opening of WATER by Edward Burtynsky