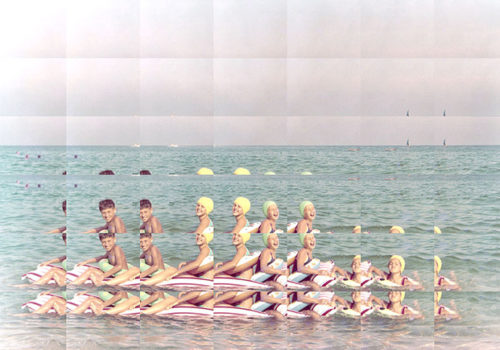 For the first time in 50 years, New York City will not hold its annual Pride Parade next month. Shuttered by the pandemic, the celebration must go on in the virtual form, taking place via broadcast instead. Even as we yearn for days before the coronavirus and await a safe return to our daily lives, we continue our tradition of commemorating the LGBTQ movement throughout June. So too does Edouard Taufenbach in his series Speculaire, transforming vernacular photographs of queer life across the years into cinematic narratives in the present tense.

On view online at Elizabeth Houston Gallery from June 3 to July 31, Taufenbach’s solo exhibition Suddenly, Last Summer culls images of LGBTQ leisure and pleasure from the collection of filmmaker Sebastien Lifshitz. Gathered over the course of three decades, Lifshitz’s more than 10,000 snapshots constitute an archive of international queer history, recording the intricacies of intimacy and desire against verdant, balmy backdrops. A femme in heels gazes skyward as she attempts to scale a tree. Sailors in speedos lounge side by side on the dunes. A woman wraps her arm around her partner’s dainty waist. The particularities of those photographs, already anonymous with the passing of time, are reshaped by Taufenbach’s hand into universal instances.

Intertwined legs, bare torsos, and the supple curves of shoulders and hips are suggestions the artist amplifies into sequences through elaborate editing. Slicing and splicing images, Taufenbach infuses movement into their stillness. The result is a paradoxical film strip that never advances. Cut into prisms of perspective, the photographs become narrative mysteries inviting viewers to imagine what transpires before or after each indelible moment. We are left to wonder in equal measure at the off-screen happenings beyond the frame and the untold histories they elicit.

In this way, Suddenly, Last Summer gives the past an immediacy characteristic of the present. Taufenbach’s collages envision queer realities unacknowledged so many summers ago as though they were unfolding instantly before our eyes. Influenced by Francois Truffaut, Louis Bunuel, and Jean Eustache, by Catherine Deneuve and Marlon Brando, Taufen- bach’s work reframes individual instances of love and longing at the seaside into the universal human experiences that propel great cinema.

Coinciding with the presentation of Speculaire at the gallery’s website, Taufenbach will have a solo exhibition at PHOTO- LA’s virtual Connect + Collect on June 27th and 28th. Although we shelter apart these days, we continue to reimagine and recover a shared sense of pride in LGBTQ history. Edouard Taufenbach assembles the community in his own way, piecing it together through collage that gives new life to that past.

Edouard Taufenbach lives and works in Paris. He attended Pantheon-Sorbonne University in France where he received his BA in Practise & Aesthetic of Cinema and an MA in Arts & Digital Media. He has taught Photography at University of Camberwell in London. Taufenbach’s works have been featured in The New York Times, Beaux Arts Magazine, and Unseen Magazine. He has exhibited his works throughout Paris including a variety of fairs such as Photo London, Paris Photo, Approche, and more.

Temporarily By Appointment Only