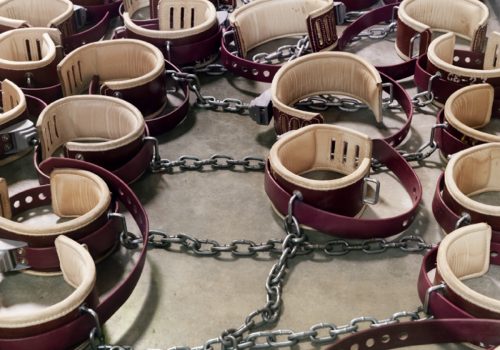 The award-winning work of British artist Edmund Clark intensely reflects on historical and political events, as well as their means of representation through a multilayered combination of different media including photography, film, text document and installation. On the grounds of a photographic, documentary approach, the works of Edmund Clark focus thematically on systems of power and mechanisms of state control. In particular, Clark, who counts among the first to be granted access to the prison camp of Guantánamo as a member of the British press, concentrates on the profound changes that Western societies have undergone since the terror attacks of 9/11.

Photo series such as “Negative Publicity. Artefacts of Extraordinary Rendition” demonstrate the far-reaching consequences of the War on Terror, which have infiltrated the normality of every day life. The series is the result of a cooperation between Edmund Clark and counterterrorism investigator Crofton Black, who as a main witness provided key evidence and helped uncover the CIA rendition programme before the European Parliament and the European Court of Justice, resulting in the sentencing of Lithuania and Poland for helping the U.S. to establish secret prisons on their territory. In “Negative Publicity” Clark illuminates cases of “extraordinary rendition”, these referring to the U.S. government-sponsored abduction and extrajudicial transfer of a person from one country to another that has predominantly been carried out by the United States government with the consent of other countries. Using materials such as invoices, documents of incorporation and billing reconciliations produced by the small-town American businesses enlisted in prisoner transportation, the trajectory between concealed places and prisons and the overall movements of displacement can be traced. In addition, photographs depict private and detention homes as well as corporate headquarters and government offices, revealing an extensive network of „black sites“ which, installed by the CIA, spreads across the world map. For this comprehensive project, Edmund Clark, together with Crofton Black, received an ICP Infinity Award.

The series “Control Order House” (2012) is the result of exclusive access to work and stay in a house in which a man suspected of involvement with terrorist-related activity had been placed under a Control Order. From this stay in 2011, which lasted for three days and two nights, more than 500 views of the place emerged. These are quick shots, uncomposed, with the flash on automatic and the lens on wide angle, documenting a domestic environment, home to a prisoner. The numerical order of the views suggests the closed sequence or a complete and continuous documentation. However, the protagonist of the site, the man under surveillance, is nowhere to be seen. Instead of revealing his presence, the exact depiction of his surroundings including all minor, albeit personal, items, evoke his disquieting absence. Just like in a careful search for traces, the camera enters into every corner and hidden recess, as if seeking to supply evidence of human life. Clark offers an oppressive course in which the abundance of details makes the lack of the human figure appear even more obvious. The cat, which was smuggled past the authorities, proves to be disconcertingly visible, freely roaming the realm of the confined space. The tension of the withheld pictorial content permeates every single image.

The series “Letters to Omar” also visualizes the suppression of individual freedom as a measure of prevention against involvement with terrorism. Edmund Clark brings together a selection of letters and postcards, which Omar Deghayes received during his six year detention at the Guantánamo naval base, where hundreds of men were detained on suspicion of complicity or intent to carry out acts of terror against American interests after the attacks of 9/11. The written documents are in part from family members, others from completely unknown persons wanting to provide support to a man whose cause has attracted worldwide attention. These personal documents were redacted and copied or scanned – including the backs of envelopes and blank sheets of paper – officially stamped and/or given a unique reference number. These are images created by this bureaucratic process. Omar never saw the original documents. These manipulated, inauthentic gestures of solidarity become symbols for methods of state control, but also come to reflect the increasingly distorted and deluded perception of an individual, intimidated by constant acts of suspicion and prosecution conducive to a general condition of helplessness and disorientation.

In „Mountains of Majeed“ (2014) Clark contrasts photographic images taken at the Bagram Airbase in Afghanistan with simple paintings of a local artist called Majeed. Even though both depict the area surrounding the base, two contrasting visions of Afghanistan emerge. One is limited to the view over the perimeters of the enclave or within its walls, the other transcends this space and conveys the vision of a lush and picturesque country with the majestic mountain range of Hindukush and green valleys and monuments. The shift in perspectives is further enhanced by the technical means deployed. Whereas Majeed´s idealizations of the Afghan country are executed with analogue painterly means, the high-resolution photographic files emerge from latest digital technology.