We Have to Save Perpignan and Soldier Leroy 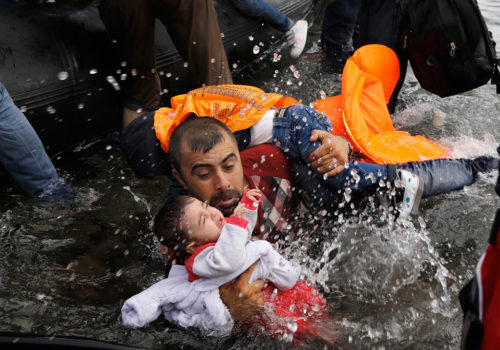 Is the title a joke?  Unfortunately not!  The festival is a wonderful ensemble of astonishing exhibitions, some  deeply moving, and of many eye-opening projections.  However, the heart of the festival, the 3rd floor of the Palais des Congrès supposed to represent booming agencies, is a cemetery!  with a mad rush that masks its deficiencies in the center of the room , a space for portfolio reviews for aspiring photojournalists.

They came.  They’re all there, the desperate reporters, who do not  live or no longer follow their passions and who have only one remaining dream: to at least show their photos.  It doesn’t matter if it ever results in a sale or a publication, as long as they’re viewed.  I attended twenty-seven of the twenty-eight Visas.  I knew the fever of the beginnings, the flamboyance and jubilation of acknowledgment.  For the 2nd and 3rd floors of the Palais , overflowing with reputed agencies and ambitious collectives, it’s over.  There’s nothing left but the Papis, this mythic photography couple, the owners of Polaris who continue to adopt all the photographers of the world.  The economic model of photojournalism is definitively dead and the routine disaffection and distortion of the public is great.  We have to reinvent it all but, most importantly, not legislate like all the present old conservatives union activists proclaim.  Astonishingly, some big players in this drastic change who deal with photography every day were present at Visa: Google, Yahoo, Facebook, Instagram.  None of them are showing up  as sponsors of Visa while they cannibalize and suck the life blood out of modern photography.  They and they alone can legitimize their photographic ambitions tomorrow by granting one or two million dollars, a ridiculous amount for them to Visa or the Photojournalism Foundation that just opened.  Two figures are very telling; Arles’ budget is 6.4 million euros, and Visa’s budget is 800,000 euros.  And it’s definitely not from Getty, in complete disarray while facing Shutterstock and who is promising support for next year, where salvation will come!  So, it’s true. We have to save Perpignan and soldier Leroy.  Not an easy task, I’ve known him since the end of the seventies: psychorigid, sectarian, resentful, with an unbearable tendency to be like Mélenchon (french leftist politician), but with crazy charisma and charm.  For twenty-five years, he has kept bringing up the same whining, monotonous chant,  never questioning or even looking for any progression!

No matter, Perpignan became his work, photojournalism his Grail, and there is always this magic moment at Visa where, facing an image, we are moved to tears and hit hard when we realize that others are living these nightmares!