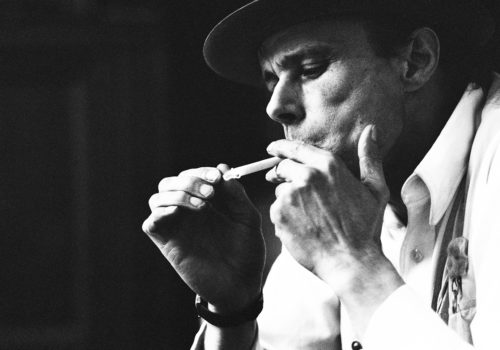 On 12 May 2021, legendary artist Joseph Beuys (1921–1986), considered both a saint and a heretic of the art world, would have been 100 years old. In honour of his centenary, the book “Beuys bleibt / Beuys – A Close Up” by German photographer Michael Ruetz (*1940), will be published in January 2021, shedding new light on the myth of Beuys. There will be also an exhibition “In Dialogue with Joseph Beuys” at Galerie van der Grinten, Cologne (23 January – 23 March 2021).

In the early 1970s, Michael Ruetz decided to document “the unique phenomenon of Beuys in greater detail than ever before, in the interest of history.” Unlike the many “journalists, photographers, devotees, and art collectors, who all wanted and expected something from Beuys,” Ruetz pursued a different goal. What he was interested in was “detailed observation,” in order to “explore the actual person behind the all too familiar figure of Beuys,” about which there was already exhaustive literature.

Ruetz got to know Beuys through mutual friends. “After a while, Beuys invited me of his own accord to accompany him, here and there. […] The pictures produced on the fly were not intended for publication in the near future, but for posterity and Beuys’s own purposes at the most.”

Beuys bleibt / Beuys – A Close Up naturally includes classic portraits of the artist “with his trademark accessories: axe, hat, waistcoat.” Ruetz also produced iconic images of Beuys during his ritualistic performance, Celtic, during which the artist presented “a paraphrase of baptism, the outpouring of the Holy Spirit and crucifixion, with the help of snow and ice in a cold concrete basin.” A similarly compelling spectacle was at the boxing match that took place as part of the legendary documenta 5 in 1972 in Kassel, between Joseph Beuys and the young art student, Abraham David Christian.

Beuys knew better than anyone else how to stage himself in the limelight and in front of the cameras. But Ruetz’s photographs penetrate this facade and testify to his own sense for the right moment and situations, and his keen eye for people. In these images it is Beuys’s body language that immediately catches the eye. “Whether Beuys acts as a performer, sketches an idea on the dark studio floor with light-colored chalk, pauses with a pencil over his notebook, sits lost in thought, with his mouth half open, with his finger on the piano keys, or looks inside himself; whether he fixes his opponent in a boxing match with a friendly look, is quietly amused, or laughs at the top of his lungs with an empty bottle of soda in his raised hand: [Beuys’s] gestures and facial expressions have a certain fascination, which is not least due to the moment in which [Ruetz] took the photograph.” (Werner Heegewaldt).

About the photographer Michael Ruetz:

Born in 1940 in Berlin, Michael Ruetz studied Sinology, Japanese Studies, and Journalism in Freiburg, Munich, and Berlin. He also pursued photography on the side, including courses with Otto Steinert and Willy Fleckhaus at Folkwangschule in Essen. In 1969, he embarked on a career in journalism working as a staff photographer for Stern magazine. In 1974, he began working exclusively on books as a freelance photographer and writer; his work has since appeared in more than 40 books and other publications. His first book, Auf Goethes Spuren (In Goethe’s Footsteps) became a bestseller. From 1980 to 1989, he had an exclusive contract with the publisher Little, Brown & Company/New York Graphic Society (Boston). He was a Professor for Communication Design at Braunschweig University of Art from 1980 to 2007. He is a recipient of the Villa Massimo Prize, the Otto Steinert Prize, and the Ordre des Arts et des Lettres. As sole heir and administrator of the estate of Heinz Hajek-Halke, he curated Hajek-Halke exhibitions in Munich, Berlin, and at Centre Pompidou in Paris (2002). Michael Ruetz is married to Erica Ruetz, an editor and translator, has an adult daughter, and lives in Berlin.