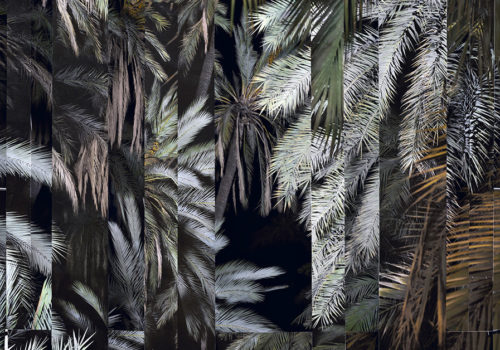 Goudal’s latest body of work unravels an artistic dialogue with the field of paleoclimatology, analysing climate and geology from the vantage point of “deep time” to acquire an understanding of our planet’s trajectory. Measured in millions of years, this timescale reveals geographies of landscapes to be momentary states in a cycle of continuous flux.

Goudal’s practice is underpinned by rigorous research at the intersection of ecology and anthropology. Her works result from the construction of elaborate, illusionistic installations uncompromisingly staged within the landscape, documented using film and photography. Post Atlantica fluidly traverses the planet’s most ecologically contrasting geographies, from tropical coastlines to swamplands, mountain ranges and theorical macro perspectives of the earth’s fundamental structure.

Occupying the main gallery, Goudal’s freestanding four metre sculptural work appears to present a flat image of a densely interwoven jungle when seen head on. As the viewer moves around the work, it is revealed to be a multi-layered three- dimensional installation, constructed of cut-out photographic prints suspended in space by wooden batons, each revealing the layers behind it. Cross-hatching photographs of palm groves from different geographies, the work references a theory on the timescale of the existence of the missing continent known as Geological Atlantis, speculating on how a rare species of palm tree (called “Phoenix Atlantica”) came to exist exclusively in two locations on either side of the Atlantic Ocean.

In the rear ground floor gallery, a photographic triptych, Plongée, transports us to towering snow-capped mountains. The verticality of the mountain-ranges is interrupted by what initially seems to be a flat, right-angled section of smooth rock. Almost resembling a dam in scale and texture, closer inspection reveals it to be a section of cardboard, with the resulting impression of a cross-section diagram of the mountain’s inner composition.

Goudal’s intervention reflects on the discovery that the rock at the top of the French region of Morbihan reached its present location after a 300,000 year journey, at the start of which it was buried under a mountain as high as the Alps, known as the Armorican Massif.

Downstairs, the final gallery presents Goudal’s latest film, Inhale, Exhale. The film pivots on the question of how humans were able to cross the Arctic during the last ice age, 18,000 years ago, to reach the American continent. Recent evidence from the seabed points to the fact that the Bering Sea completely froze during this harsh period, creating a temporary land bridge allowing the passage of humans and other species. Inspired by these discoveries, the film choreographs an intervention staged in a marshland lake. Slowly, large-scale backdrops emerge from the water, accompanied by heavy mechanical sounds. As they are hoisted up, the backdrops, depicting images of vegetation drawn from the artist’s archive, take up increasing space within the frame until they entirely transform the landscape, implying a pathway across the water. Finally, they gradually reimmerse themselves in the water and disappear completely. The film collapses geological and experiential time, visualising a landscape in a constant state of flux.

(Switzerland), 2019; Finnish Museum of Photography (Finland), 2018; The Photographer’s Gallery (UK), 2016; FOAM Museum (Holland), 2015. Goudal’s work is held in public collections including Centre Pompidou, FOAM Museum, Fotomuseum Winterthur and Musée de la Roche-Sur-Yon. Goudal (b. 1984) graduated from the Royal College of Art (UK) in 2010 with an MA in Photography, and lives and works in Paris, France.