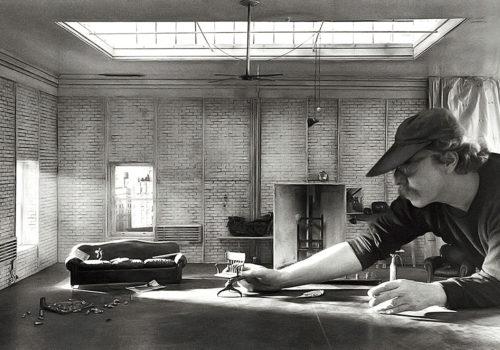 Charles Matton was a formidable jack-of-all-trades artist and a rare character.
He was a friend. I owe him one of the most amazing days of my life.
We were in the mid-70s. One Sunday morning the telephone rung.
“Hello, it’s Charles, we’re taking you to lunch at Richard Bohringer. Robert Frank will be there.”
Bohringer lived at the time in a kind of castle near Paris. The lunch was sumptuous. Frank: Brilliant.
After lunch, I offered him a portfolio and an interview in one of the next issues of PHOTO.
“Of course with pleasure.” he replied, send me a note. I did so the next morning.
He never answered! 6 months later, we met again at a diner in New York. I reminded him of his promise. He exclaimed:
“I remember it very well, I received your letter, my window was open: your letter flew away!”
I never asked Robert Frank for an interview again.
Finally, another memory of this day: the cannabis field which adjoined the castle, which the neighboring farmers of Bohringer took for weeds and which they kindly but unsuccessfully offered to eradicate.
Last memory finally, this is where I learned to play this card game: the elevator!
Jean-Jacques Naudet

As part of their represention of The Estate of Charles Matton, Dumonteil Contemporary presents an exhibition of the work of Charles Matton, on the theme “Interiors”. This polymorphic work has been presented for 35 years around the world, and more recently in London, Berlin and New York and it is part of major collections such as those of the Center Pompidou, Mahj, Palais de Tokyo…

In 1985, Charles Matton created his first “reconstructions of places”, fictitious spaces delimited by a single wall, sometimes two, with the aim of photographing them and then painting on the prints obtained. It was only two years later that he created his first boxes, dioramas presented between three partitions and a window. There are observation boxes with a profusion of precise details and those that multiply the spaces with false mirrors or sets of mirrors. Very quickly, Charles Matton considered these polychrome sculptures as a medium in its own right, in the same way as painting, drawing, sculpture and photography, which will participate in the thematic meshing of his subjects.

This major exhibition at the Dumonteil Contemporary gallery therefore marks the return of Charles Matton to the Parisian scene. As my father did before with success, I wish, by signing the representation of Estate of artists, to help discover or rediscover artists whose work marks and crosses time by their talent, to a multigenerational public, to show their sensitivity , their genius. This is why I am happy to be able to share with you during this exhibition, the incredible and fascinating multidisciplinary universe of Charles Matton.