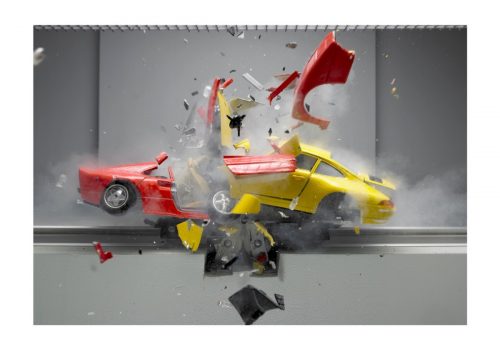 For more than a century, cars have had a decisive impact on our daily life, and few other commonplace objects have so divided public opinion. Cars are both curse and blessing, design sensation and environmental killer. Going beyond their pragmatic role as a means of transport and transportation, they serve a social function that is far from neutral. Cars are projection surfaces for desires and aspirations, as tokens of flexibility and freedom, and status symbols connoting power, wealth, prestige, and sex. Highly innovative automotive industries in countries such as Germany, Italy, and the United States cultivate this aura through compelling advertising images, bolstered by an influential car lobby. Against this backdrop, design engineers develop high-performance vehicles with turbocharged motors and fast acceleration paired with the promise of an oasis of well-being: airbag-protected and, more recently, self-parking, with self- driving “autonomous” systems in the works.

In modern and contemporary art, the car has repeatedly figured as a motif, from Andy Warhol and Arman to Sylvie Fleury and Gabriel Orozco. It has starred in film classics such as The French Connection and Bullitt, not to mention the many James Bond adventures where BMWs or Aston Martins often play a key (supporting) role – depending on how much the manufacturers bring into the film budget. And contemporary photographers on both sides of the Atlantic have created iconic images that take the car far beyond its commercial depictions as a mere commodity.

In an exhibition at Kommunale Galerie in Berlin, Germany, 23 photographers are introduced with incredibly diverse individual works and series that represent the bandwidth of today’s artistic approaches to this beloved theme. We are confronted with images of accidents and empty streets, of cars that are neatly parked or abandoned and deteriorating, of vintage car rallies with their museum-like display, photographic destructions and collages, and several interpretations of the proverbial state of being “on the road.”

The selection offers a multifaceted view of society that reveals both a requiem for our car-driven civilization and an ode to our never-ending fascination with the car in its many incarnations – from household asset to design icon. Conceptual interventions stand alongside sociological studies, as cars are beautified, marginalized, or magnified in their detail. We encounter the car as the protagonist of a veritable road movie, even as the car has lost its topmost ranking among the possessions most desired by Europe’s millennial drivers. While this unique exhibition of contemporary photography dedicated to the car signals our shift into a high-tech mobile future, the future of cars themselves is marked by uncertainty.