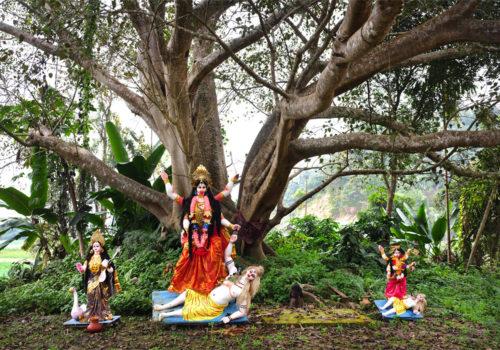 Paris-based photographer and filmmaker Deidi von Schaewen usually works for several years on series of motifs from which she develops “unexpected typologies that reveal the unlimited creativity of human beings”. Many of these series have been and are still being made in India, a country she has travelled through for over thirty years, fascinated by everyday life in the countryside and the cities: huts in the slums of Bombay, murals of the women of Hazaribagh, interiors of noble houses and, above all, places of worship dedicated to the gods of nature: groves and sacred trees.

India’s sacred trees are widespread in the subcontinent and belong to different cultures and religions, especially Hinduism, Buddhism and the animistic views of indigenous peoples, each with their own significance. The sites are found in the most diverse locations, but hard to find for those looking for them.

The thirty-five photographs, most of them large format, presented in this exhibition at the Château de Boisbuchet, are accompanied by two installation art  for the occasion by students from the Design Village in New Delhi: objects from everyday Indian life under the trees. Finally, two films by Deidi von Schaewen on the ritual ceremony celebrated every twelve years in honour of the forest hermit Bahubali in Shranavabelgola, in the state of Karnataka, close the exhibition.

The ‘Sacred Trees of India’ are the focus of a series of events this year in honour of trees and in honour of trees and forests. The name ‘Boisbuchet’,  interpreted by some as a pyre for burning witches, but others simply translate it as ‘scrub forest others simply translate it as “forest of brushwood”, justifies the theme in itself. But the reason is the forest as such, omnipresent in Boisbuchet as a source of energy and working materials, as a source of inspiration for creative experiments and as a place of rest, and even a hidden forest cemetery.

Photography by Deidi von Schaewen, Paris, with installations by Design Village, New Delhi.
Under the High Patronage of the Embassy of India.