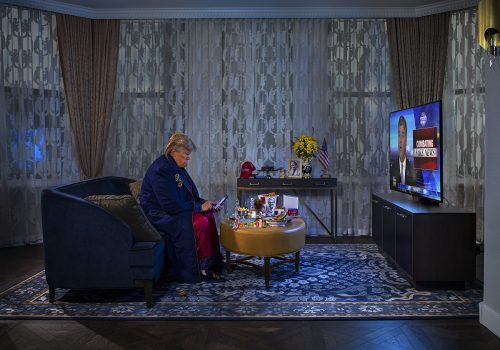 This fall, the Canadian-Israeli artist Dina Goldstein is set to release her most controversial series yet, The 10 Commandments.

Its grounding piece, Lincoln, depicts the 16th and most popular President in the aftermath of the Sandy Hook Elementary School shooting. His towering figure barely fits in the otherwise empty school corridor littered with children’s clothes, glass shards, bullet shells and blood stains. Yet the sense of mourning and loss emanating from the scene renders him small and defeated. By extension, the imagery renders small the constitutional principles on which The United States were founded. Coupled with the 6th Commandment “Thou shalt not kill”, the piece evokes the President’s own public assassination and further underlines the country’s ongoing issues of gun violence and gun policy.

Using her established cinematic methodology, Goldstein blocks the Lincoln scene meticulously, each segment, each prop strategic and symbolic, coming together after a months-long pre-production process. All the while capturing in the singular still image a hint of the storyline that forms the greater narrative sequence of the series.

That narrative seeks to examine the socio-political makeup of America through its political icons – the presidential figures that mark the most notable and controversial chapters in American history. Each tableau features a President portrayed through the prism of their politics, popularity and/or notoriety, further contextualized by a contemporary backdrop, and assigned one of the moral and ethical postulates of the Ten Commandments. These, often humorous, narrative juxtapositions deconstruct the layers of political deceit, exposing latent hypocrisies and challenging the integrity of a system that is supposed to be a model of democracy and social progress. In the context of the series, Lincoln reaffirms the gravitas that lightness and humour in other pieces may inadvertently obscure. – Sonja Baksa

Excerpt from the Artist Statement

This year I created a series based on my observations of the sea changes roiling America since the election of Donald Trump in 2016.

The 10 Commandments juxtaposes the tenets of the Ten Commandments with America’s current political, social and cultural status. The Bible continues to play a large role in American public life, as politicians, candidates, and activists advert to it directly in support of a variety of positions, programs, and policies. By creating images, which include some of America’s most famous presidents, within the context of the Ten Commandments,I intend for the visual shock, incongruity, irony and metaphor to inspire discourse and insight into how American society has gone so astray, diverting away from the “American Dream. – Dina Goldstein