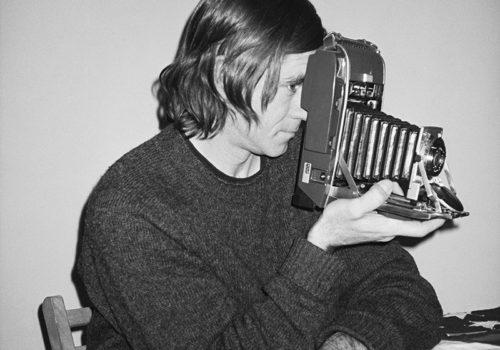 Dries Van Noten and Die Plek present the first U.S. exhibition of Gus Van Sant’s photographic works in over a decade. Some of these portraits were taken in the 1980s and 1990s while casting his provocative and pioneering films Mala Noche, Drugstore Cowboy, My Own Private Idaho, and To Die For.  Even as Van Sant successfully works within Hollywood, he is an artist who subverts protocol and pushes standard definitions of character and storytelling, including casting amateur actors alongside Hollywood’s biggest names, as reflected here. 15 Positives is his vision from that periphery.

In these oversized portraits one senses the ease and distinct personality of the individual before the camera. At the same time, the viewer forgets what makes each person different from the other. The takeaway is a sense of connection between each portrait and the viewer, and between the seemingly disparate subjects themselves. Instead of pulling away from each other they become part of a greater single unit. The location shots provide a setting to their unique world.

At the forefront of Dries Van Noten’s work is likewise the cultivation of connection between different people of all backgrounds and experiences. Inclusivity and openness are the heart of the eponymous clothing line. With the new Los Angeles store, the brand evolves its definition of the experience of art, bridging fashion with the fields of gastronomy, music, and fine art, and exhibiting works across genres to create a community of people with different interests and personal stories.

Here, too, is another connection: the honesty and directness of Gus Van Sant’s and Dries Van Noten’s art, which welcomes the different interpretations of those drawn to it. For both artists, the works speak volumes but are also quiet enough to listen.

This selection of positive prints from black & white Polaroids is guided by a feeling of immediate interconnectedness with the subject portrayed. A Polaroid photograph comes out as the union of a positive and negative. The raw, analog quality present in these Portraits is a rendition of what a negative Polaroid allows its positive counterpart to filter through. What remains is The Positive.

The faces in this book were originally Polaroids used to cast the movies I have made. Beginning with my movie “Mala Noche”, I took the pictures of the lead actors, so that when planning the details of the shoot I could stare at the pictures and imagine the characters coming to life, and how they might visually relate to one another. As my films grew larger and when I started to get more money to make them, I used the Polaroids of the faces to do the initial casting. I think that the bulk of these pictures are of people that I had a meeting with about playing a part in either “Drugstore Cowboy” or “My Own Private Idaho”. These were taken in casting sessions.

(…) After we talked about something innocuous and removed from the task at hand, I would generally grab my camera which was sitting in front of me (I actually sort of hid behind it, it was so big) and I would ask, “Can I take a picture of you?” and every time I asked, so far, people have said yes. (…)

I would stand up and show the person to a place I had previously found that had good light, and after checking my light meter, saying nothing more than “Okay, ready,” I’d snap one Polaroid. Sometimes the person would stick around to see if it came out, other times they split right then. (…)

The expressions of the people are interesting, and I wonder if it is me that they are reacting to or is it the camera. I think it’s the camera, because it’s an old funky-looking 1965 Polaroid Land camera, and people always ask about it like it’s the oldest camera they have ever seen.

As I look closely at the pictures, I am reminded about the power a single person carries around with them. Everyone is different, and yet they all look somehow the same. They all embody huge potentials for success or failure, for nervousness or calm, for sainthood or deviltry, and have individually had their proportionate share of both. They remind me of the moment the picture was actually taken, and how that moment is linked to their past, their present and their future. The day that I happened to catch them was just one little piece of time that is connected to all the other pieces of time that make up their lives. And sometimes I think I can see this in the picture itself. Somehow the camera is able to capture it. I don’t know how, but it does, I swear to God.

Die Plek is an exhibition platform for artists working in the liminal space within photography and contemporary art.
Die Plek’s founding approach makes a bold claim: the work will find its own time and place. Travelling across multiple destinations and diverse, nontraditional sites, Die Plek is born without a fixed address. Upending the classic notions that an artist’s work must fit within the rigid gallery framework and architecture, the space for every exhibition will be custom selected.
With a focus on photography, Die Plek aspires to reposition the medium. By both putting a stress on it (celluloid or digital matter) and at the same time ignoring the knowledge what materials were used to make the piece of art, Die Plek possesses a revised singular, holistic approach of the visual arts without typecasting it as the commonly-phrased category “art and photography”.

Die Plek, translated in English as The Place, is a creative project founded by curator Kaat DeJonghe.