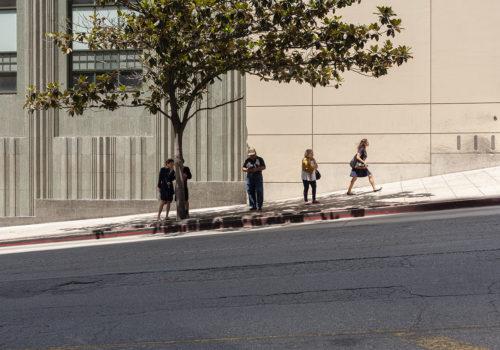 In 2018, Downtown Los Angeles became the fastest gentrifying area in the USA. Photographer Désirée van Hoek, who works in Downtown, experienced the spectacular transformation of the old city centre up close. She recorded the process in over 135 images.

Over the last decade, Downtown Los Angeles has undergone a spectacular transformation. The historic city centre has had a face-lift, with new museums, skyscrapers, designer stores, restaurants and bars springing up. Project developers jumped in, and real estate prices shot up. In 2018, Downtown LA was, in fact, the most rapidly gentrifying area in the US, putting pressure on many of its long-standing residents and businesses. In the meantime, little was being done for the neighbourhood’s existing issues, such as poverty and homelessness. A new population mix arose of wealthy and disadvantaged residents.

The photographer Désirée van Hoek, who had been working in the area since 2007, saw lots of things going on that the squatters’ movement in Amsterdam in the 1980s had warned about: rocketing housing prices, growing inequality, and the city becoming Disneyfied and bourgeois. In Notes on Downtown, she has recorded the changes in the district in over 135 images.

Désirée van Hoek made her international debut in 2015 with her book Skid Row, about the extremely impoverished district of the same name in Downtown Los Angeles. The book, designed by Mevis & Van Deursen and with an introduction by the LA Times journalist Gale Holland, was an unanticipated success in the Netherlands, Belgium, France, Switzerland, Japan and the US, and it was selected as one of the Best Designed Books of the Netherlands and Belgium. In the LA Review of Books, Michael Kurcfeld described Skid Row as “a vivid record of a fragile world by an unlikely outsider.” Wired’s Pete Brook praised Van Hoek’s approach: “As responsibly as one can make images of society’s disadvantaged. Kudos.” A Note on Downtown is Van Hoek’s second book.
www.desireevanhoek.com

To mark the publication of A Note on Downtown, designed by Mevis & Van Deursen, an exhibition and a public debate will take place in Het Nieuwe Instituut in Rotterdam, Netherlands.