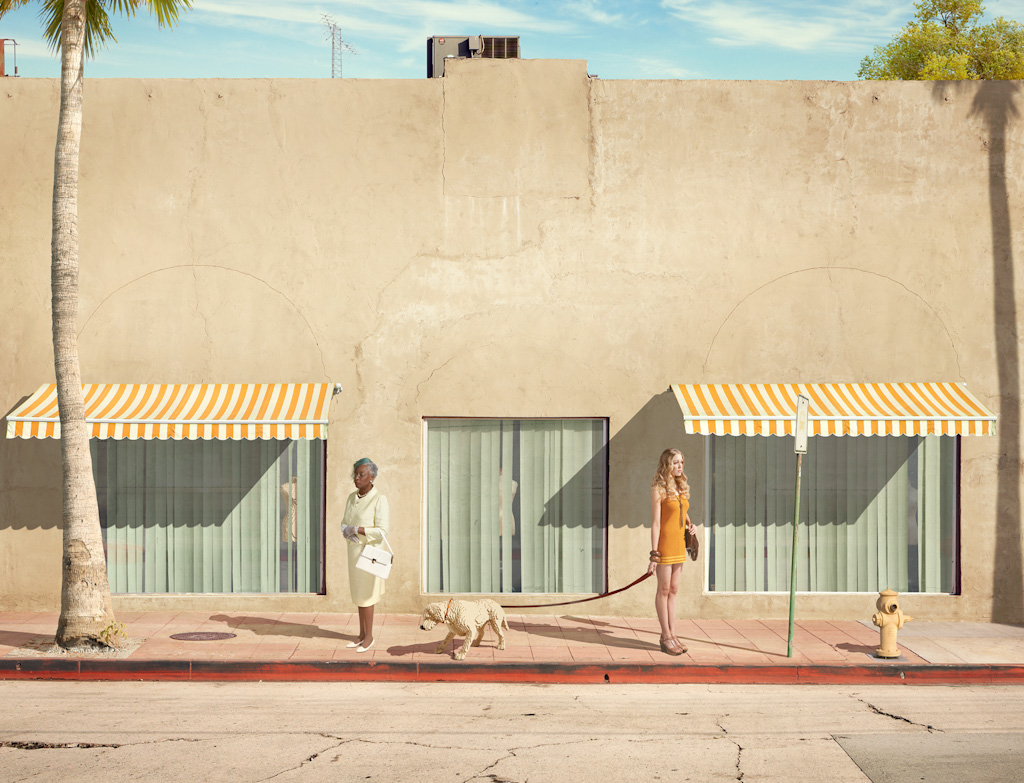 A multimedia collaboration between Nathan Sawaya (Sculptor) and Dean West (Photographer) The project is a series of tableau compositions based on ideas about nature, culture, society and more specifically, identity. Identity as a cultural creation has been heavily commercialized and manipulated, and we prominently portray this through a highly stylized representation of contemporary life. The integration of Sawaya’s unique sculpture is key to the series’ narrative and aesthetic. The images have been constructed using modern photography techniques, combined with specially sculpted LEGO® objects placed within the scenes. The combination not only builds on and accentuates the images’ aesthetic, but also compels the viewer to deconstruct each tableau, thereby exposing elements of the construction of cultural identity itself.

When is your decisive moment for taking photographs ?
For me there is no decisive moment. My images are the product of months and months of planning and production.

What inspired you work/your series ?
The way a digital photograph is constructed through millions and millions of pixels, is much like a brick by brick Lego construction. I wanted to draw attention to the way an image and more specifically – one’s identity is constructed.

The commercial you would like to do ?
I’ve always wanted to do the Lavazza calendar! Other than that I’m interested in working with ad agencies that are willing to take risk’s and go the extra mile to create something unique.

What are the current photographic trends for you ?
I don’t like trends, trends come and go. A photographer must find there own style and develop it over time based on their own interest’s.

The world experience has changed drastically. Its representation has evolved. Has digital become inevitable in the photographic creative process ?
I wouldn’t say digital has become ‘essential’ in contemporary photography- I know many successful and engaging contemporary artist’s that still use analog processes. The digital world however- has expanded the medium to new realms of possibility at an affordable price. Photographers have always used the latest technology accessible to produce new and provocative work.

Dean West “one of the world’s best emerging photographers” (AFTER CAPTURE MAGAZINE), has a highly conceptual and thought-provoking style of contemporary portraiture. His body of work has been featured in top photography magazines, art galleries, and received numerous international awards. Born in small-town rural Australia in 1983, Dean’s love for photography began in his high school’s darkroom. After graduating in 2007 with a Bachelor of Photography with majors in visual culture and advertising, Dean formed a partnership, Berg+West, which won nationwide acclaim as a high-end photography and post-production studio. Through clients like the QLD Government and SONY, Dean quickly learned to transform stick figure sketches into intricate composited photographs with immense detail and clarity. In 2008, Dean was included in Saatchi & Saatchi’s collection of the world’s top 100 emerging photographers and went on to win Advertising Photographer of the Year at the International Aperture Awards. With success in advertising and a growing list of collectors- Dean decided to dedicate more of his time to the world of art. In the following years, his series ‘Fabricate’ received worldwide recognition from top photography competitions, including: the International Colour Awards, the Lucie Awards, the Loupe Awards, and in 2009, Dean was the winner of the IV International Arte Laguna Prize, Venice, Italy. This final award being the most prestigious for emerging artists with over 5,000 applicants gunning for the top prize in photography, sculpture and painting. Zoom Magazine quickly nominated Dean in the ‘New Talent’ issue of 2010 and the Magenta Foundation awarded Dean an emerging Photographer of Canada. Dean’s body of work is now being collected by a growing number of sophisticated art collectors in Australia, USA, Italy, and Canada.