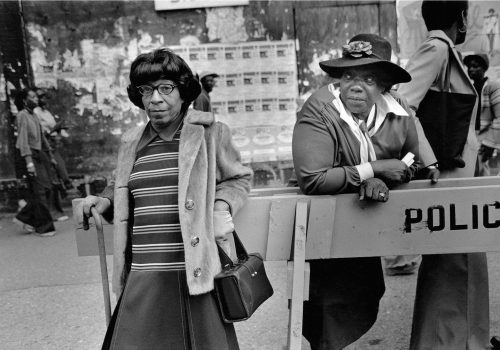 Stephen Bulger Gallery presents “Places in History”, this is the first solo exhibition of work by Dawoud Bey at the gallery, presented in conjunction with the release of his most recent monograph Seeing Deeply, published by University of Texas Press, 2018.

Dawoud Bey (born 1953) is an American photographer and educator renowned for his large-scale colour portraits of adolescents and other often marginalized subjects. This exhibition presents works from four distinct series. The earliest work is from “Harlem USA”, a series that reconnected Bey with the neighbourhood where his parents first met, and where he visited the family as a child. Bey began photographing in the streets of Harlem in 1975 with a small format camera while reacquainting himself with the neighbourhood and engaging with the people he had glimpsed from the car window years before. Over a five year period, he eventually became a permanent fixture at public events taking place in the community, such as block parties, tent revival meetings, and anywhere else where people gathered. He experienced transformational relationships and exchanges with people he met, and it is in those relationships and the lives of the people that these pictures recall that the deeper meaning of these photographs can be found.

“The Birmingham Project” commemorates the tragic killing of six young African-Americans killed in Birmingham, Alabama on September 15, 1963. The bombing of the 16th Street Baptist Church killed four young African-American girls: Addie Mae Collins, aged fourteen, Denise McNair, aged eleven, Carole Robertson, aged fourteen, and Cynthia Wesley, aged fourteen. Several hours later, two young African-American boys: Johnny Robinson, aged sixteen, and Virgil Ware, aged thirteen, were shot and killed in related violent incidents. Receiving a commission from the Birmingham Museum of Art, Bey spent seven years of repeated trips to Birmingham in advance of beginning portrait sessions, photographing over a fivemonth period in two locations: the original sanctuary of Bethel Baptist Church and the Birmingham Museum of Art. This series was first exhibited in 2013. The subjects of his diptychs are local community members who mirror the age of the youths at the time of their death, paired with adults who are the age these youths would have been if they were not killed. This project asks that we, the viewer, consider the past through the present.

Returning to his first subject after approximately 40 years, Bey stated “I returned to visualize Harlem in the midst of profound transformation. Due to increasing gentrification, demographic shifts are permanently altering the social and physical landscape, bringing both new amenities and population displacement, resulting in a radical reshapement of the built environment.” The large-scale colour photographs titled “Harlem Redux” include urban landscapes and subtle, yet poignant details of this changing environment.