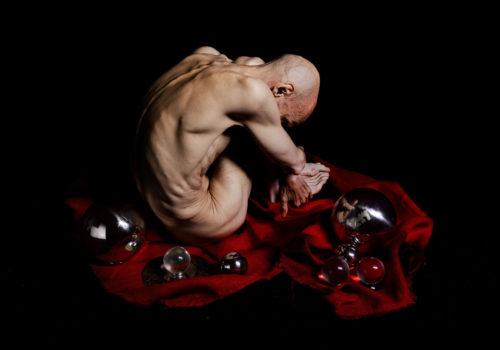 Davide Conti’s modern paintings, as he himself defines his representations, offer viewers a true illustration of the contemporary, filtered through a rich lexicon of symbolism, references, and visual and technical know-how.

His artistic journey began with painting, which then naturally gave rise to his photographic images.

In these images, the artist makes his experience with art his own, acquiring and elaborating it according to a personal perspective, and appropriates – thanks to a modern and innovative photographic technique – iconographies and episodes of the history of images depicted over centuries. Following the course and ideas of the artists who preceded him, he lets himself be inspired by scenes taken from the Jewish, Christian, and Classic traditions, making them his own and creating a completely personal world.

The ekphrasis of his works brings to light that symbolism, those references, and also that visual and technical know-how, along with a wealth of meaning that makes his modern paintings an actual illustration of the “human tale”. It is no coincidence that he refers to paintings that are traditionally considered “high painting”, suitable for illustrating gestures, important or historical events,or for presenting and narrating human beings and their stories, whether small or large, brought back to their essence, stripped of reality.

Born in 1970 in Bologna, Davide attended the Art Institute and the Academy of Fine Arts and graduated with a degree in painting in 1993. In 1991, he received a scholarship to attend the Collegio Artistico Venturoli (Art College), where he remained until 1998. While continuing his activities in the arts, Davide began to develop a passion for graphic design. He then started to collaborate with a well-known publishing house as an editorial designer. However, ever since childhood, and throughout his artistic endevours, photography has always been present. It then went on to become an important part of his professional and artistic career. His works are a constant contamination between painting, figurative arts, graphic design, and photography. He recently chose Misano Adriatico as his work base, but without ever forgetting his beloved Bologna.

His works have been shown in many exhibitions, both collective and personal.