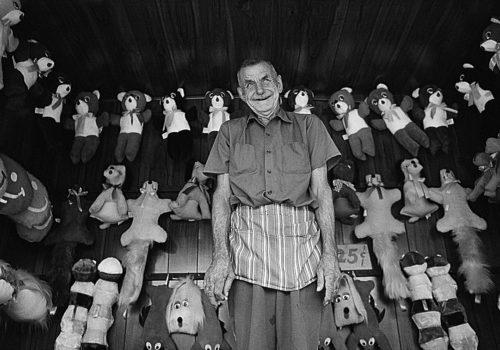 When I was about 10 years old, I read a book called Toby Tyler by Otis James. It was about a little kid who runs away and joins the circus. It got into my head and has stayed there all my life. There is something about carnival lights, the smells, the sounds, the energy…. if you’ve ever had this childhood adventure, the indescribable mix of wonder, amazement, and probably a little fear, I think you will love this series.

American Carnival was mostly shot over almost 50 years. Several photos in the series were taken in the 1970s with good old Tri-X 400 ASA film. Some were shot at the Hoxie Brother’s Circus which was touring Southern Ohio where I was studying photography at Ohio University. That was the begging. The rest of the images were made somewhere between then and now. I love carnivals and try to time my travels around their dates and locations.

Several of the selections in this series are panoramic images. As a photographer, I was trained in the art of seeing things through the confined dimensions of a 35mm piece of film, approximately 3:2, slightly wider than tall. As all photographers have done, I have worked within these boundaries using wide angle lenses to capture more of the scene than would otherwise be possible, but the resulting distortion of distance and perspective never felt quite right. I found myself secretly jealous of painters, who could select any size canvas on which to create art.

When I found panoramic photography a few years ago, I realized I had discovered my unrestrained canvas. Panorama photographs are carefully crafted from multiple photographs that are combined to form one large image. With panoramas I can photograph without traditional framing limitations. This is immensely satisfying for me, as I feel panoramas are best able to convey what you would have seen had you been standing there beside me when I took the picture. Now I can show you the midway!

Of course, not every shot is a panoramic image. I still love to just roam around and photograph people using my DSLR as a point and shoot camera. Many of these quick shots are my favorites because they seem to capture the experience quickly and then move on. As with the panoramic images, this too is reminiscent of the actual carnival experience.

It was suggested that I make this a black and white submission. I like that. I often choose black and white for my carnival images. By stripping away color, the kind of underside that exists in all carnivals becomes more apparent. What I mean is that there is a kind of duality. The carnies are genuinely gregarious and friendly, but they also want every dime you have. The screams from the rides…. Are they joy, fear, terror? Carnivals have a kind of seedy, scarry side and I think black and white images let that seep through. Many of these photos are from a book published by Schiffer Books in 2019. Some of them are black and white in the book as well as here, while some were presented there in color. Somehow, they are not the same images.