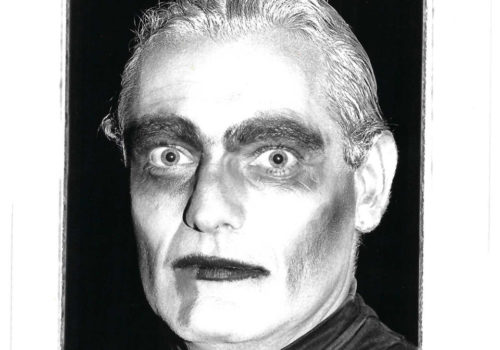 ​I moved to Los Angeles in September of 1980. I found a tiny but affordable apartment for myself and a sweet German Shepherd named Ranger in Hollywood. To explore our new neighborhood, we chose a different direction each day for our walks. On the third day we headed west. In just one short block we found ourselves on Hollywood Boulevard! The Chinese Theatre, The Hollywood Wax Museum, the Walk of Fame! Although Ranger was relatively unimpressed, I was, well in those days we called it “stoked to the max”. If you know my books, you know I love to photograph carnivals. Here was a daily carnival right in my own backyard.

The very next month, when Halloween rolled around, I thought I would check out my new photographic playground. I decided to bring two camera bodies so that I could quickly choose between two different lenses. I had no definite idea what I would find going on up there. Zoom lenses were not particularly good yet, not that I could have afforded one anyway. I chose a Nikkor 28mm f/2.8 for full length shots and a Nikkor 105mm f/2.5 for close in portraits. Two on-camera flashes borrowed from the camera store where I worked at the time filled out the equipment list. Back then, my camera body of choice was the Nikkormat EL.

​I decided to use black and white Tri-X film. I thought it would add to the sort of gritty look of Hollywood Boulevard. I have always preferred street photography in black and white and besides, it was cheaper, and I could process it myself. It turned out to be the right choice for one more reason. In black and white the expressions and personalities are at least as important as the costumes, if not more. As it happened, I found that I had picked the best lenses for the kinds of images I wanted to make. I used the exact same equipment to photograph Halloween in Hollywood for the next three years.

​A few friends volunteered to join me and sort of watch my back. We met at my apartment that first night full of excitement and anticipation. I grabbed up my gear, patted Ranger on the head for luck and we headed off to Hollywood Boulevard. What we found was nothing short of spectacular. Although many of the costumes were just funny or scary like any other Halloween, this was Hollywood. Men and women who had to hide their identities all year were able to display themselves in “costume” for the world to see. I admit that I was then, and I guess still am naïve to their world but the sadness under the celebration touched me. This was something worth photographing.

The streets were packed with throngs of parading celebrating people. It was like a huge moving play in which the actors were playing themselves. I tried to join the parade but there was too much to see. Walking within it made it too hard to subtract what I wanted to capture from the whole scene. I have never liked shooting candid photographs. Maybe it’s my ego, but I want my photos to be about how the person I choose to photograph reacts to having a camera stuck in their face. My camera. I needed to create separation. That first year was as much about figuring out the best way to “do this” as the images themselves.

​I found that by standing off to the side, I could choose my subject and then follow them for a while to find a suitable background. Most often that just meant an open area, sometimes it was a sign or scene that would enhance the photo in some way. I had to work fast. While my friends followed me following someone else, I would spot the background and approach my subject. It was a simple request: “Hi, I’m working on a series called Halloween in Hollywood, can I take your picture?” I had come up with the trick years ago. If you tell people that you are photographing a series, it takes their minds off the question of why you singled them out and makes them relax. Asking that question in front of my friends also gave me a kind of model release just in case I ever wanted to publish these photos.

​I do not like to pose my subjects. I may choose the background and ask them to stand here or there, but the poses and expressions are up to them. I have learned that I have to get my picture within three seconds of raising my camera if I want to get that first honest pose. I call it honest because in that moment they are not thinking about how they look but rather who they are being and why I stopped them. It is hard to explain, but everyone knows that “camera face” that people make. The one that they think they look their best doing. I do not want that. I want them thinking only about why I chose them – the part they are playing in my series. In this case, the part they are playing in their costume.

​Back then “crop” was a dirty word to me. The goal was to use the full frame to capture exactly what you wanted. At Ohio University, where I studied photography, we filed our negative carriers to show the ragged edges to prove we had not cropped. I am presenting this series as the original prints that I made in that tiny, tiny darkroom that I built in that tiny bathroom of that tiny apartment. Look for the rough edges. I’m proud of them.