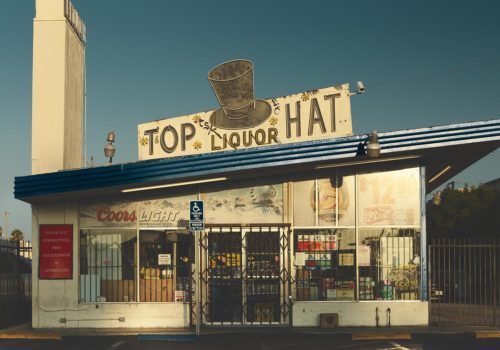 Carrie Scott and David Hill present Beer. Soda. Lotto, a long-standing photographic series by Ben Hassett. The exhibition marks Hassett’s first solo show and will open on 30th September at David Hill Gallery in Notting Hill, west London. With Los Angeles’ liquor stores as his only subject, the photographer has gathered a photographic survey as painterly as it is forensic. Part sunlit utopia, part cool analysis of a city on the edge, Beer. Soda. Lotto is a poetic and unparalleled portrait of Los Angeles.

Fundamentally embedded in a history of street photography – one that sees a nod to Garry Winogrand’s visual cacophony and Ed Ruscha’s calm distance – the compositions celebrate the beauty of LA; breath-taking light fills each image, punctuating every corner and facade. Hassett has a signature and singular ability to capture and create colour so seductive it hardly feels real. This is his intent. The impossible runs through each composition; where people should be, there are empty streets filled only with buildings bathed in the brilliant desert light. As a result, this work is more about the act of looking, than the actual streets and buildings the viewer is looking at. Hassett’s compositions are about the edges, the colour, the play between decay and beauty.

In the impossible stillness and study of each image there is also urgency. To create the series Hassett methodically plotted each shot and then had to work with incredible speed when in situ. Anyone that knows Los Angeles will tell you that not all neighbourhoods are particularly welcoming. Pausing to take in the city’s facade is not always possible. In Hassett’s images we see things you simply couldn’t absorb in real life; details lost with a blink of an eye. In one image, a blue street sign pops out against a yellow sign for liquor. The signs merge into “cherry Liquor.” In another, a stack of boxes tumble in a room above a bright green store front. Hassett has gone to great lengths to make these images hyper-real, working with an architectural camera that allowed him to correct otherwise converging verticals, compose his photographs and deliver each scene in tremendous detail.

The series has an evocative, timeless melancholy. Hassett’s vision of LA is poetic – against the flat bleakness and empty streets. This is a portrait of a city but also a portrait that illustrates our failure to observe.

“With echoes of work by the early Photo Realists, Ben Hassett’s Beer. Soda. Lotto series is so impossibly hyper-real that it leaves the viewer asking more questions than it answers” David Hill, co-curator Beer. Soda. Lotto

Ben Hassett (b.1974, London) is a self-taught photographer known for his portraits alongside a striking use of light and colour. Over the course of his twenty-year career in commercial and editorial photography, he has pictured many of the world’s leading actors, actresses and supermodels, including Marion Cotillard, Cate Blanchett, Jennifer Lawrence and Tilda Swinton.

He has shot for magazines such as Vogue, Harper’s Bazaar, Numéro and W Magazine, and created advertising campaigns for brands including Christian Dior, YSL, Shiseido, Burberry, Bulgari, Calvin Klein and L’Oréal. He has also directed several successful moving image commercials. Hassett continues to push the boundaries in still photography and more recently, digital motion video. Hassett’s first monograph COLOR was published by Damiani in 2019 and was produced as a limited edition of 1000 numbered copies.