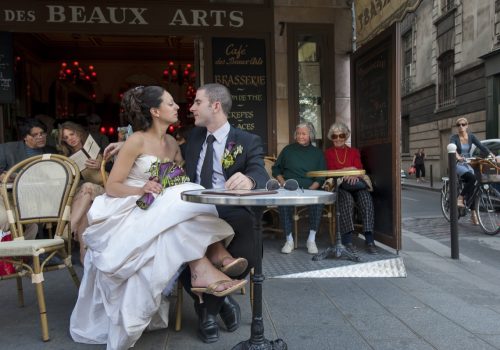 Preview
In 2004, I arrived in Paris as an intern at the VII Photo Agency. After spending the previous eight months at the Danish School of Journalism, I had my mind set on becoming a photojournalist, and the possibility of documenting the harsh realities facing humanity around the world. While at VII I spent many hours each day looking at images, many of which were taken in war zones from Kosovo to Rwanda. Over the course of one year, I began questioning whether or not documenting the world’s misery with photography really made a difference.

In my spare time, I decided to discover the beauty of Paris on foot, with my camera. Long walks along the meandering Seine, under the colorful fall foliage of the Luxembourg Gardens, or along the bustling Rue de Rivoli became therapeutic outings which helped counterbalance the often somber black and white images that I archived on a daily basis at the agency. The more I walked, the more I realized that interesting and intriguing photos were to be had on any street corner in Paris, my new home. Wandering around the city was a kind of meditative, unconscious experience that I enjoyed very much, without having any predefined subject or assignment to photograph. I found myself playing with form, geometry, compositions, shadows and color. I also saw a Paris that was less romanticized and grittier, a change from the black-and-white street photographs that we know from the 1940s and 50s. Ernest Hemingway wrote, “If you are lucky enough to have lived in Paris as a young man, then wherever you go for the rest of your life, it stays with you, for Paris is a moveable feast.”

Towards the end of my internship at VII, I showed some of my work to Annie Boulat who headed the Cosmos photo agency next door. She liked the fact that I spent time documenting street life in Paris. I remember her commenting, “Keep photographing Paris because most Parisian photographers don’t want to photograph their own city. They want to travel to ‘exotic’ faraway places.” This statement gave me confidence that I was perhaps on the right track and not wasting my time visually capturing the spontaneity of the people and places that I encountered. In tribute to one of my favorite composers, George Gershwin, I was indeed ‘An American in Paris’. My photos of street performers at Paris Plage (Paris Beach), or of people exiting metro stations were not necessarily meant to document or tell a story. They were perhaps just snap shots of the beautiful fleeting moments that come upon us on a daily basis and seemed to present themselves to me unexpectedly on good days of taking photos.

In 2008, I attended a week long photography workshop in NYC led by Alex and Rebecca Norris Webb, a husband and wife team whose color photography I have long respected and admired. The theme of their workshop was ‘Finding your vision’. Each afternoon we, the students, were free to photograph anywhere in NYC. I found myself venturing out of Manhattan, towards the boroughs of Queens or Brooklyn, constantly on the hunt for interesting compositions. I quickly began to realize that I had become a foreigner in my own country. I had spent enough time living abroad in Europe that daily life in the U.S., and more specifically in NYC, was fresh and invigorating. It was similar to the feeling that I had when I moved to Paris four years before.

The workshop in NYC was a great experience, and at the end I began seeing some similarities between the photos that I took there and those already in my archive from Paris. I put some of the photos side by side and noticed that they could visually play with one another. New York’s streets had been photographed in color before, but this was not often the case in Paris. I also found myself producing images that asked questions or touched on socioeconomic issues in both cities. Despite my intention to clear human suffering from my mind, while an intern at the photo agency in Paris, such injustices and inequalities were omnipresent on the streets of both of these global cities. For example, one day in Washington Square in NYC I had a long conversation with a homeless lady who had been on the streets for several years and had suffered from an enduring drug addiction. She was not alone. I also noticed that some photos from both cities could mark the strong historical and cultural ties between France and the United States represented by the small statue of liberty in the Luxembourg Gardens. Many photos were historical markers themselves since cities are like living organisms undergoing constant change.

That week in the Big Apple was the beginning of a 10-year long visual love affair with Paris and NYC, which has culminated in this photographic juxtaposition of my two favorite cities. Taking street photographs over this time period has allowed me to understand who I am and is perhaps also a reflection of my character.

This kind of photography is a unique and unforgiving genre that requires patience and perseverance. One is at the mercy of the world and cannot organize or predict when or how to take pictures. Every moment is different and thus requires different photographic techniques. I’ve found that being calm and at peace with my surroundings and myself often led to interesting pictures. Athletes talk about being ‘in the zone’ during an important match or during a big race. This state of mind is important when photographing in urban places. Perhaps I was in a ‘New York State of Mind’, which is one of my favorite Billy Joel songs. I often think that feeling pictures is as important as seeing them.

In contrast to my first years living in Paris or re-discovering my own country through several trips to New York City between 2008 and 2018, I am now less inclined and perhaps less motivated to photograph in these two cities. I often have my camera with me but feel less of an urgency to search for photos. Maybe I have become a local in both places, and now feel the need to photograph elsewhere as Annie Boulat mentioned in 2004 during my internship in Paris. Nonetheless, it was the cross-cultural experience of photographing people in Paris and New York that produced ever-lasting memories. I’ve always been curious about meeting new people and discovering new places. In New York, I remember chatting with a drug dealer on a quiet street corner in Harlem one crisp fall evening. I asked him who his clients were and he responded, “Dave, they’re guys like you downtown.” Then there was the trader having a cigarette break outside of the New York stock exchange. He thanked me for asking his permission to take his portrait which then led to a rather lengthy conversation about photography and Paris. In Paris, I was among the protestors at the Place de la République following the Charlie Hebdo shooting on January 11, 2015. People had climbed up the statue and were singing the ‘Marseillaise’, terminating with a vocal gest of both humor and fear, “But we are scared at the same time.” There were an estimated 1.5 million people present and it was nearly impossible for the police to secure the area.

One thing is certain, both Paris and New York City conjure up dreams. As Alicia Keys sings in her hit song ‘Empire State of Mind’ with Jay-Z, New York is a “concrete jungle where dreams are made of”. Paris is not a concrete jungle, but rather an ancient stone one that people around the globe dream about visiting at least once in their lifetime.

One of my dreams has been fulfilled. It was photographing the extraordinary people and places of Paris and New York, my two favorite cities.