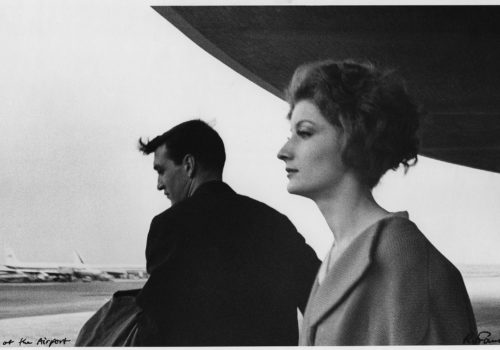 Danziger at Fetterman presents an exhibition devoted to rare prints and rarely seen images from the American photographs of Robert Frank. The exhibition is comprised of 20 mostly unpublished works from the years 1955 – 1957 when Frank was traveling around America shooting what was to become not just his seminal work “The Americans”, but a seminal work in the medium of photography.

Born in Zurich in 1924, Frank emigrated to America in 1947. As an immigrant, Frank was fascinated by his new country and after his first road trips he applied for a Guggenheim Fellowship to fund a longer and deeper journey around all parts of the country. In his proposal to the Guggenheim Foundation Frank wrote: “The photographing of America is a large order – read at all literally, the phrase would be an absurdity.” The “total production” of such a project, he added, would be “voluminous.” Nevertheless, the proposal was accepted and Frank embarked on a three-year journey around America during which he took over 28,000 photographs.

Eighty-three of the images were subsequently published in the book “The Americans” leaving 27,900 or so frames which could have easily been edited into numerous subsequent volumes but over the years Frank was content to just make prints of the images he felt were the most resonant. Frank printed these images in the same 11 x 14 inch format as the ones included in the book.

Sarah Greenough, senior curator of photography at the National Gallery of Art in Washington noted: “Frank revealed a people who were plagued by racism, ill-served by their politicians, and rendered increasingly numb by the rising culture of consumerism. But it’s also important to point out that he found new areas of beauty in those simple, overlooked corners of American life – in diners, or on the street. He pioneered a whole new subject matter that we now define as icons: cars, jukeboxes, even the road itself. All of these things, coupled with his style – which is seemingly intuitive, immediate, and off-kilter – were radically new at the time.”

By the late 1970s, Frank had turned his primary attention away from photography to film making and in order to fund both his life and his film work, in 1978 he sold his existing archive of prints along with several hundred prints made to complete the transaction. The prints exhibited here all come from that purchase — the largest private collection of this most important figure in the history of the medium.