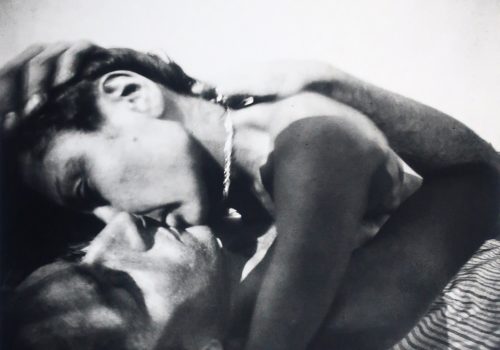 Daniel Cooney Fine Art present their first solo exhibition with Paul Smith. The exhibition will feature vintage black and white photographs and unique three-dimensional photographic constructions. The images were made with a homemade pinhole camera on the Lower East Side of Manhattan between 1984 and 1987.

Smith had been constructing paintings with picture planes curving around the viewer to represent wide-angled fields of vision. In 1982 he began to make cameras where the film plane similarly curved around the aperture. He photographed the torn up streets, and gutted and abandoned buildings, around his Lower East Side home. He also photographed intimate moments with his friends and lovers then, at the height of the AIDS crisis. This imagery creates an emotionally rich and physically stark portrait of New York City in the mid 80’s.

The vintage photographs and constructions are previously unseen or have not been exhibited in almost 35 years. Smith had three solo exhibitions at the legendary East Village gallery Greathouse in 1985, ‘86 and ‘87. Daniel Cooney Fine Art exhibited the artwork of Greathouse owner, Tim Greathouse earlier this year. Both men embody the vitality of the East Village art scene of the time, Smith working as an artist, critic, curator and teacher, Greathouse as an artist and gallerist. Smith also exhibited then at New Math Gallery, Gracie Mansion Gallery, Club 57, ABC No Rio, The Drawing Center, The Palladium and The Carnegie Museum. He also contributed to projects of Group Material at The New Museum, The Museum of Contemporary Hispanic Art, The Studio Museum in Harlem, The Museum of Modern Art, and on NYC subways.

Smith has been included in many surveys of the East Village curated by Henry Geldzahler, Sur Rodney Sur, Phyllis Plous and John Caldwell among others. He has appeared in several photographs by his friend David Wojnarowicz including “Silence Through Economics”, and had a role in Rosa von Praunheim’s film “Silence Equals Death”. Smith included works by then emerging artists Andres Serrano and Zoe Leonard with early works by Richard Prince, Jenny Holzer and Barbara Kruger in exhibitions he curated for ABC No Rio and various New York City nightclubs.

Smith’s writing has appeared in Art In America, ARTS, Artnet and The Economist. His work is in the permanent collections of the NY Stock Exchange, Coca-Cola, The Carnegie Museum and others. He has received support from the Joan Mitchell Foundation, The Pollack-Krasner Foundation, The Cummington Center and Skowhegan School.