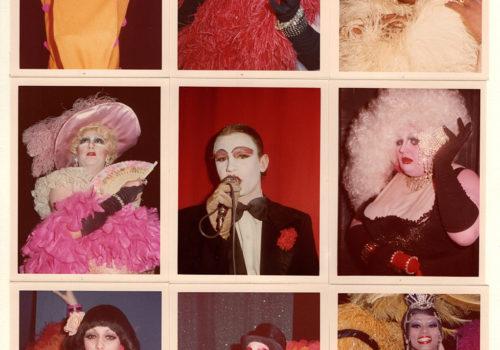 As queer men of color, Antonio and Juan’s interest in gender, drag, and the multiplicity of masculine identity was a centerpiece of their nearly 30 year career. For the first time, Kind of a Drag brings together the artists’ personal, commercial, and editorial work to explore how these themes of intimacy, identity, and style were interwoven between their public and private practice.

The artists met in 1962 at the Fashion Institute of Technology and rose to prominence as illustrators during the mid-1960s working for Women’s Wear Daily and The New York Times under the signature “ANTONIO.” Together, the duo revolutionized the canon with their dynamic drawings that incorporated queer iconography, art historical motifs, and pop cultural references into their sprawling practice that included drawing, painting, photography, sculpture, and fashion design.

Independently, Antonio and Juan drew and photographed sensual homoerotic portraits, private fetish role play, and the confines of gay havens such as Fire Island Pines in which men are depicted in personal spaces: reclining on a bed, seated in a studio chair, photographed in the shower, or on the deck of a private pool. As the decades wore on, and the civil and gay rights movements took hold, the gender play that had so often stayed underground was seeping into the cultural zeitgeist. This narrative arc of progress is evident across their oeuvre. Personal Study, Fabel, 1983, depicts an exquisite pencil drawing of a Latino man with a thick pompadour and flamboyant diamond jewelry adorning his ears and chin. His face is captured in profile, as if walking down the street, paying no mind to the viewer. Personal Study, Anonymous, c. 1983, shows an unknown model in a punk inspired outfit and a BDSM mask as a hyper styled version of queer and street subcultures combined. Meanwhile, in Norma Kamali campaign, Anonymous models, 1985, Antonio and Juan styled Kamali’s swimwear models as leggy dominatrixes, an advertisement which appeared in magazine pages around the country.

Having worked in, and parallel to, the fashion industry for so many years, Antonio and Juan had a deep knowledge of how clothing and accessories could convey the complex identities of their subjects. As such, Kind of a Drag reveals two parallel worlds each informing the other: a world in which fashion co-opts subculture, and a subculture which relies on fashion.