Dan Hayon – After the harvest 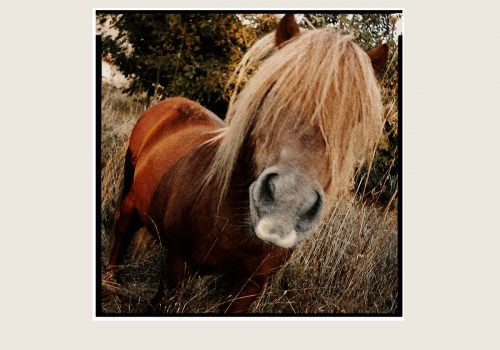 Moving photos and a beautiful story: By Dan Hayon this is the exhibition Hélène Aziza presents from October 29th to November 17th .Here it is :

During the holidays, 19 years ago, we lost ourselves on a secondary road in Gard and Garonne.
It was just after the harvest period.

As it was already very late, we looked for a place to spend the night and continue the next day.
A small sign, barely visible between the trees at the edge of the road, announced in hand-painted red letters “Rooms at the farm”.
I followed the direction indicated and I plunged into the forest on a narrow dirt track.
After a few kilometers, we arrived, my wife and I, in front of the door of a big building, austere and decrepit,
where we waited for an old gentleman who, according to his blue work overalls, should have been the farmer.

We introduced ourselves. Entering the hall barely lit by some moribund light bulbs, we saw above the steps
a blazon as discolored as his clothes, walls or mirrors. “The coat of arms of his family” – he explained –
because his name was Gaëtan de Falguerolles and he was born there, 70 years ago, in this house, a former Cistercian monastery.
And yes, he was a farmer, a true real, with a passion for drawing the genealogy of his former family.

He usually rented two or three rooms (as dilapidated as the rest of the house), but that night, besides us, there was nobody.
The next day we had breakfast, simple and modest, on the terrace which hid the pool in which the monks raised their fish.

Then, before we hit the road again, Gaëtan took us on a tour of the farm and we discovered, as in Ali Baba’s cellar,
dozens of tractors and other agricultural machinery, completely rusty and scattered everywhere under the trees, Leon the old dog,
hens, horses and other animals …

And what could be a simple meeting, became a beautiful friendship.

Today Gaetan is forever resting and he has become a branch of his dear family tree.
The house was sold because no one in the family wanted to take it.
Too many repairs, not enough profits, too difficult to work the land.

The house of Falguerolles, the former monastery, is called today “The Castle”.

The cracks have all disappeared, the walls are painted and smooth to perfection.
And if you want, you can have your wedding or celebrate your divorce there, because they rent exceptional apartments.
You have the choice between the Romantic and Roquefeuil Suites or the Carmin, Fushia and Dorée Rooms.

From now on, Mrs. B. and Mr. T. welcome you in a mansion where meet happily, the charm of old stones
and modernity in a discreet luxury. Works councils are welcome and there is also a guided tour in 3D.
Dan Hayon