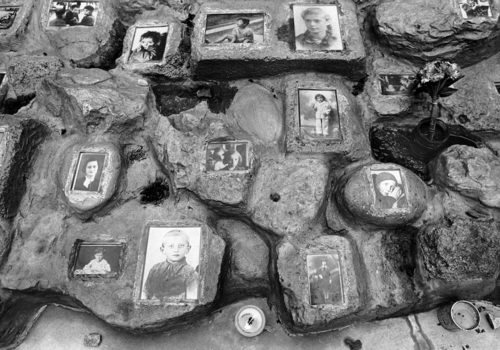 Max Hirshfeld’s parents, Julek and Frania, fell in love in a Polish ghetto during World War Two and survived death marches only to be separated again due to the chaos in post-war Europe. Displayed alongside the photographs in this exhibition are select excerpts from the more than seven hundred letters they wrote to each other during their three-year separation.

Sweet Noise offers a glimpse into post-war Jewish life through the eyes of a child of Holocaust survivors. By sharing an unforgettable love story, Hirshfeld’s images follow his mother’s history as she traces her path from the Polish towns where she was raised to her imprisonment in Auschwitz, the largest of the Nazi concentration and death camps. The photographs record her poignant return to Poland, forty-six years after her liberation from Auschwitz in 1945.

Though Sweet Noise revisits events that began seventy-five years ago, its message is more relevant today than ever before. This powerful story reminds us that such pivotal moments in history are indelible. This exhibition shows that love is the keeper of hope and longing, desire and faith.

In addition to pertinent Holocaust and Jewish Heritage programing, the exhibition provides opportunities for historical and cultural education on numerous subjects, including pre-and post-WWII European and American relations, issues of class and privilege, and the meaning and importance of different forms of art and communication.

Max Hirshfeld is recognized as a master at spotting decisive moments while revealing the warmth and humanity of his subjects. He was born in North Carolina in 1951 and grew up in Decatur, Alabama. After moving to Washington, DC, he studied photography at George Washington University, graduating in 1973. His work has been shown at the Corcoran Gallery of Art, the Kreeger Museum, and is part of the permanent collection at the National Portrait Gallery. He has won silver and bronze awards from the Prix de la Photographie Paris and been featured in Communication Arts, Eyemazing, and American Photography. Hirshfeld’s editorial work has been published in The New York Times Magazine, Time, Vanity Fair, and other national publications, and his advertising work has been showcased in campaigns for Amtrak, Canon and IBM, among others.
https://maxpix.com/