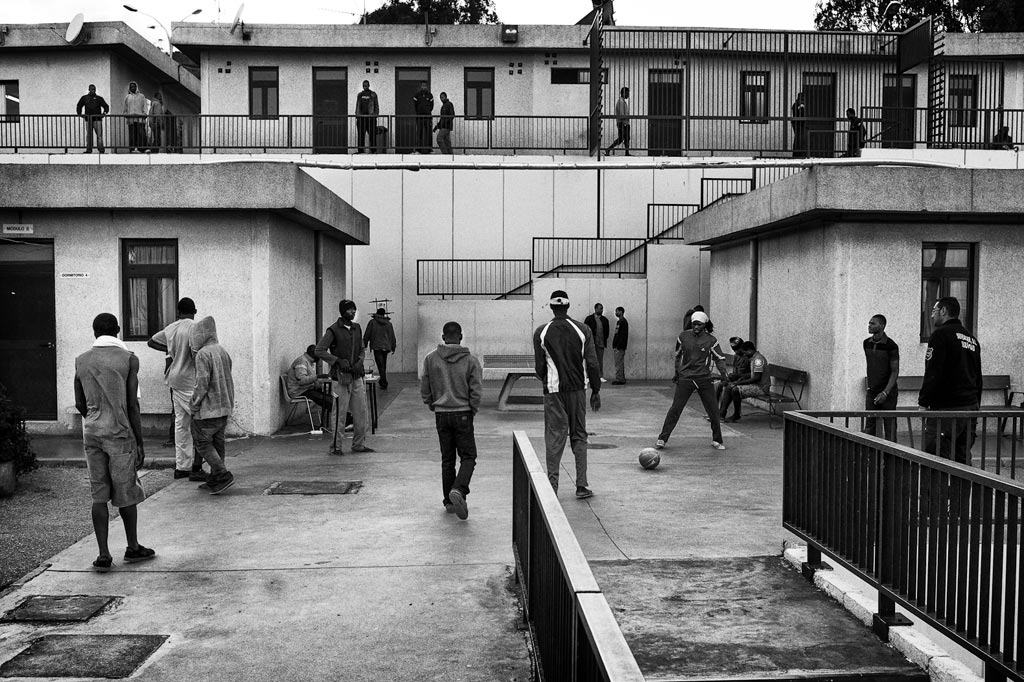 NEC PLUS ULTRA – Ceuta, tales from the edge of Europe

This project is a record of the circumstances that migrants people, escaping from the most ravaged regions of West and Sub-Saharan Africa, experience daily in the city of Ceuta, at the edge of the southernmost corner of the European Union.

Ceuta, along with Melilla, is a Spanish enclave located on the coast of North Africa surrounded by Morocco. Separated from the Iberian peninsula by the Strait of Gibraltar, Ceuta lies on the border of the Mediterranean Sea and the Atlantic Ocean.

The city itself is bounded by a border fence, that consists of parallel 6 metres (10-foot) fenceline topped with barbed wire and highly guarded with all the newest technologies by Spanish Guardia Civil and Moroccan Army financed by the EU. The function of this separation barrier is to stop both illegal immigration and smuggling.

Because of its unique geographical location this city represents a territory in which EU migration policies have a special significance, and therefore it has become the visual embodiment of the idea of Fortress Europe.

Fortress Europe is a metaphor that define the European external border. It seems to erect racial, ethnic and religious boundaries. These boundaries are especially significant in its southern part. Arguably, the Mediterranean frontier is this area of Europe materialises more than anywhere else the idea of edge and limit of its frontier.

Since 2010 I started to work in Ceuta, because this very idea of the “border of the border” attracted me so much and I wanted to see with my eyes the tangible and real consequences of the EU migration policies upon the thousand of people who try to reach Europe.On my last trip to Ceuta I spent almost three weeks following the daily life of a group of people who, kindly enough, had decided to share their story with me. Day after day, I was involved in their routine made of football matches, uncountable hours spent in a parking lot waiting for the next vehicle to be “parked”, listening to their stories about their route through Africa to follow their dream of living in Europe.

Moreover I had the opportunity to enter into a very contentious place, most of the time hidden from the sight of the society: the C.E.T.I. (Temporary Holding Centres for Immigrants).

The local C.E.T.I. is a modern structure administered by the Ministry of Labour and Social Affairs of Spain. At the time of my visit, there were almost 450 guests inside it, almost all men aged between 18 to 30. The C.E.T.I. provides technical and welfare services to all asylum seekers. Inside the compound there are 8 blocks that serve as bedrooms, there is also a large refectory, a small gym, two classrooms for Spanish language lessons, a computer room and a large hall. Once the migrants are accepted in the CETI as asylum seekers, they are provided by the Administration with a green card which serve as an identification document and allows them to get in and out of the structure.

The daily life inside the CETI is strictly regulated by meal times, three times a day and 11PM is curfew. There is a constant flow of people coming in and out of the centre: the ones that remain inside participate in different activities provided by the Administration, such as Spanish language lessons or they help the employees of the centre in maintenance labours as gardening or cleaning. However the most beloved activity among them is playing football in the court in the centre. Others, instead, go to work as “parking boys” in downtown Ceuta and some others just go out to enjoy a walk along the shoreline,where one can glimpse the silhouette of the much sought after Iberian Peninsula.

I was very concerned in understanding and witnessing such a symbolic place, because despite the cold statistics provided by our Government about immigrations, these are real people with an actual story to tell. I discovered through my conversations with them, that the most common emotions among the guests is distress and anguish for the situation they face: months of waiting, full of uncertainty about their future and with no guaranties they will finally get the visa to stay in Spain. My main objective is to document the life of these people on the edge of Europe. I want to serve as a witness to testify of the difficulties, the plights but also the joys and hopes of these men and women who hope to build a better future for themselves but, who are now stuck at the fringe of their dream.

Gianfranco Tripodo is a independent documentary photographer born in 1981 in Manila, Philippines. Lives in Madrid, Spain.

He has been nominated twice for a Joop Swart World Press Photo Masterclass in 2009 and 2011.

He took part, between 2009 and 2011, at Reflexions Masterclass,an international seminar for the teaching of contemporary photography which has hosted some of the finest young authors from the world over. This seminar is conducted by Giorgia Fiorio and Gabriel Bauret. He has been a member of Cesuralab, an italian photographic collective based in Milan, whose art director is Alex Majoli, Magnum Photos.