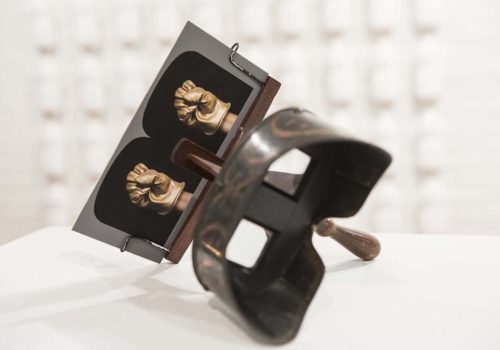 At the Colorado Photographic Arts Center (CPAC), Experiences of Identity includes four artists from different cultures who explore themes of immigration, identity, home, memory, and the myth of the American Dream.

“Each of the four artists in this exhibition shares a unique, deeply personal, and thoughtfully-crafted story that stands on its own,” said Samantha Johnston, CPAC Executive Director and Curator. “But when viewed together, a larger story about immigration emerges – one that is vastly more complex and nuanced than what we often see from politicians and mainstream media.”

For example, Priya Suresh Kambli came to the U.S. from Mumbai, India, at age 18. In the single suitcase she brought with her was a family photo album that became the source material for her series, Buttons for Eyes.

“Using the photographic lens, I strive to understand the formation and erasure of identity that is an inevitable part of the migrant experience by providing a much-needed personal perspective on the resulting fragmentation of family, identity, and culture,” she writes. Contrasting these weighty issues is a sense of playfulness expressed through her use of vivid color, natural light, and powered pigments. Her work “winks, pokes and inverts – suggesting joyousness – mixed with the loss and regret that accompanies us all.”

Vikesh Kapoor’s ongoing project See You at Home is a personal narrative about family, memory, and the myth and melancholy surrounding the American Dream. In 1973, Kapoor’s parents migrated from India to a small town of 10,000 people in rural Pennsylvania. By juxtaposing images made of Kapoor’s parents’ current life in America with archival images of their past, See You at Home explores the dichotomies of home and homeland, freedom and isolation, and collectivism and individualism.

Emily Hanako Momohara’s series Fruits of Labor explores themes of immigration, identity, and labor within the framework of her own family narrative. Her great-grandparents left a famine-entrenched Okinawa, Japan, for Hawaii. Upon arrival, they found work on a pineapple plantation. Using imagery of agriculture and migration to unpack her personal and family story, Momohara allows us to critically reflect on the diverse experience of immigrants in America.

Finally, Rafael Soldi is a Peruvian-born artist whose practice centers on how queerness and masculinity intersect with larger topics of immigration, memory, and loss. His series Entre Hermanos is an extension of a larger work, Imagined Futures, in which Soldi addresses the sense of grief shared by many immigrants for the countries they left behind. In Entre Hermanos, Soldi invites male-identifying queer Latinx immigrants to contemplate how each perceived their future as young people in their countries of origin, and how that perception may have changed over time.

“It’s fascinating to me to consider how photography not only helps to bring these diverse stories to light, but also creates a safe space for conversation about immigration — one of the most politically divisive topics in America,” said Johnston.

Priya Kambli completed her BFA at the University of Louisiana in Lafayette and continued on to receive a Masters degree in Photography from the University of Houston. She is currently Professor of Art at Truman State University in Kirksville, Missouri. In 2008 PhotoLucida awarded her a book publication prize for her project Color Falls Down, published in 2010.

Vikesh Kapoor is a multidisciplinary artist from Sunset Pines, Pennsylvania, whose work examines race, class and identity as a first-generation American. See You At Home has received support from curators at the National Portrait Gallery, SFMoMA, LACMA, Tate Modern, the Nelson-Atkins Museum of Art and the Andy Warhol Museum.

Emily Hanako Momohara has exhibited nationally, most notably at the Japanese American National Museum in a two-person show titled Sugar|Islands. She has been a visiting artist at several residency programs including the Center for Photography at Woodstock, Headlands Center for the Arts, Fine Arts Work Center and Red Gate Gallery Beijing. She lives and works in Cincinnati where she is Associate Professor of Art at the Art Academy of Cincinnati and heads the photography major.

Raphael Soldi holds a BFA in Photography & Curatorial Studies from the Maryland Institute College of Art. He has exhibited internationally at the Frye Art Museum, American University Museum, Griffin Museum of Photography, among others. His work is in the permanent collections of the Tacoma Art Museum, Frye Art Museum, King County Public Art Collection, and the Pennsylvania Academy of Fine Arts. He is the co-founder of the Strange Fire Collective, highlighting work made by women, people of color, and queer and trans artists.