Cologne: Reflections from the 80s by Jamel Shabazz at Hardhitta Gallery 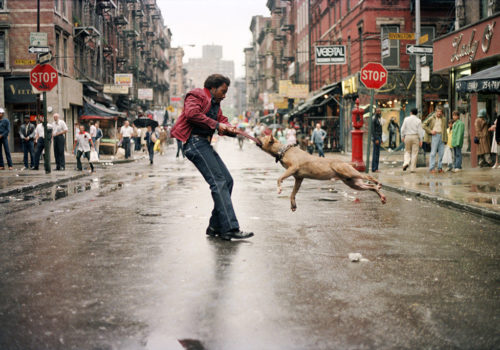 Hardhitta Gallery is presenting its first exhibition of American photographer Jamel Shabazz through March 29th, 2015. The exhibition Reflections from the 80s will showcase eighteen photographs of New York City’s street vibes over the course of the decade.
Shabazz has been representing urban New York visually for the past 40 years. His iconic images capture the lifestyle and energy of the time like no other. He has become one of the key people to immortalize the New York of the 80s. To this day, his work inspires international fashion trends, global youth culture, and has also served as a source of inspiration for countless films. His secret lies in his care and compassion for people.
Born in 1960 and raised on the tough streets of Red Hook, Brooklyn during the civil rights movement and the Vietnam war, Jamel grew up being exposed to violent and war-torn visual imagery which gave rise to his deep sense of empathy. Instilled with the urge to speak out and show a different perspective, he first found self-expression in graffiti art and photography with the emergence of the hip-hop movement in the 70s.
From the age of fifteen, picking up a camera gave Jamel a sense of purpose: “It allowed me an opportunity to have a voice and use my voice in a way that can inspire love and unity.” His photographs reveal his daily search for hope, promise and beauty.
At seventeen and unsure of what to do with his life, Jamel served as an American soldier in Germany for three years. After returning home in 1980, he spent the next 20 years working as a correctional officer. Driven to helping people in his community to stay out of the system, he spent his free time as a proactive street photographer in search of and spreading hope.
In the 80s New York was a tough environment: violent rivalling street gangs, drugs, and arrests were part of the city’s dark fabric and gave rise to the artistic expression of social and political injustices of the African-American community. Many young people found themselves at difficult crossroads or facing challenging and often violent day-to-day realities. Jamel wanted to do what he could to ease the tension of his community and help kids stay out of trouble. So he took to the streets with his camera, attracting young people for whom he became a mentor and inspiration, helping with life choices and keeping a positive outlook for the future.
His photographs are Jamel’s visual diary – a collection of memories, moments, conversations, people and details. They reflect personal relationships, while giving expression to universal sentiments of all adolescence such as hope, dreams, self-discovery and living-the-moment.
Jamel Shabazz photographs are part of several permanent collections including the Whitney Museum of American Art, The Smithsonian Museum of African American Art, The Bronx Museum of the Arts, The Rubell Collection and Schomburg Center for Research in Black Culture, The Kenneth Montague Collection. His long list of group shows include the Victoria and Albert Museum; Brooklyn Museum of the Arts, Brooklyn, NY; The Newark Museum of Art, Newark, New Jersey; The Bronx Museum of the Arts. Museum of the City of New York.
The artist lives and works in New York.