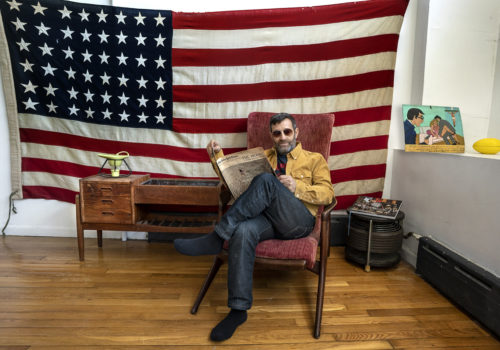 Sally Davies is a photographer whose works are in the permanent collection at the Museum of the City of New York and the NYC 9/11 Memorial Museum.  She is the author of the book “New Yorkers” and of the acclaimed McDonalds Happy Meal project (1.75 million online hits).  Her archive is now part of the Downtown Collection of Fales Library at NYU. Her photographs have been featured in the New York Times, the UK Daily Mail, PDN online, Huffington Post, Photolife Magazine, The Guardian and The New York Post.  In 2014, Sally’s ”Lower East Side Photographs” were exhibited at the Bernarducci Meisel Gallery in New York City, with a 2nd solo exhibit “New York at Night” that followed on June 4, 2015.  In 2014 Sally received a citation from the city of New York for her ongoing commitment to photographing the Lower East Side.

The series presented here is from her photographic monograph publication:

New Yorkers presents more than 70 intimate portraits of people in their apartments and studios—captured in unique style by renowned New York street photographer Sally Davies—along with their testimonies and tales, and their illuminating observations on what it means to be a New Yorker.

Patricia Lanza : How did you go about finding the subjects for your New York location portraits?

Sally Davies : I wanted to document people at home. The collection is a glimpse into the lives of New Yorkers who are still living here. Sadly, I’m not sure people can still move to NYC and stay for 40 years.  Most cannot afford to do that now.  Only the rich,  and eventually we will have a city of only rich people.  And a city filled with only one type of person is going to be very dull.  New York used to be a city of small particular neighborhoods. You could live somewhere and it felt like a small town.  Each area was known for different ethnicities, different food, different shopping etc.  It was so good,  and that is almost all gone.

My plan was to put a call out on social media, explaining the project and asking for willing participants.  I started the project photographing a friend or two and word spread from them quickly.   Soon I had people contacting me asking to be included.  Everyone knew someone. I could have photographed 1,000 people and still had more waiting.  It was important to cut as wide a swath as possible and include as many types of people as I could.

Who was one of the most interesting person/s you photographed?

Sally Davies : It’s impossible for me to choose a favorite.  Each person’s story is unlike anyone else’s in the collection.  The book joins them all together, to tell a much bigger story of New Yorkers.   The sum is bigger than the parts.  There is something in each photo that I love.  Here are just a few.

-Bruce Mazer sitting in front of his vintage American Flag.  He inherited that flag from his uncle’s family. There are only 48 stars on the flag because Alaska and Hawaii were not yet American States.

-Vicky Roman with her fridge magnet collection and her dog Sparky.  Home is where the heart is, and that photograph is everything to me.

“I love the big town because I came from a small village. I love the big buildings, I love the noises, the bars, the restaurants, the lights. There is more going on here, more mystery. Always better to live in a mixed community. I love the diversity here. I do not live with just the Arabic community—I live with Chinese… with Greeks… with Ukrainians! I love it!” —Rachid

-Gerald Decock Seated on his sofa in his other worldly apartment in the Chelsea Hotel.

I would be hard pressed to find another home that came close to this.

“New York is magic to me. Gentrification is inevitable. You can choose to resist it or live your privileged life and be grateful for what you have. I choose to focus on how incredibly blessed I’ve been in this life. I live in a famous landmark building that’s been under construction for eight years. It’s complicated, but my takeaway is this: if the building is a living thing and the ghosts are resisting the transition, I have no idea what will happen, but I live joy every day in my magical abode. I choose not to be angry about it and be in the present always.” —Gerald

“When I first arrived in New York City on February 14 of 1980, I knew immediately it was where I was meant to be. It had a certain gritty, dark elegance that was gorgeous to me and remains so. New York City is like a living organism, always growing and changing. It is a very alive city. The natural rhythm of the city feels synchronous or harmonious to my own. I feel depressed anywhere else.”  —Suzanne

“There’s a word in Portuguese called ‘saudade’ and it’s very hard to translate into English, but it means a melancholy for a person, place, or thing when away from it, and it goes deep into your core. This is what I feel when I am away from New York City too long. I love to travel and have even flirted with leaving NYC before, but what always happens is, after a certain amount of time, I start to feel this ‘saudade’ for New York City. It becomes a part of you, and it becomes that great love of your life that, no matter what, you become cursed as you compare everyone else to her—and although they may suffice, they will never be her. New York City is that love for me.” —Will

“I came to the East Village in 1980 and became part of the stew of artists, drug dealers, and Ukrainians. It was a dangerous time, but there was an embracing artistic buzz. Everything seemed not only possible, but probable. It was Paris between the wars. Then AIDS hit and we lost our soul. The art world changed to the ‘art market.’ Rents soared, but against all odds, art persists. We have the best of the best and lots of it. It’s a gift to live here among it.”  —Gracie

“New York City used to be a great, wide-open city where you could live like a millionaire on nothing if you knew what you were doing. Those days are long gone.“—Jim Marshal

When people are seen or visited in their living space, that tells you a great deal about them.  How and what was the biggest reveal when photographing these New Yorkers in their private space?

Sally Davies : There is a thread that runs through New Yorkers.  Most of their homes will reflect their financial life; the more money they have the nicer their sofa will be, and the larger the space will be.  But other than that, each space is a portrait of the person who created it.  Their collections and their choices tell their story.  New Yorkers are tough.  You have to be to make it here.  Rich or poor, you have to hustle to get whatever you get.  We love that it challenges us in ways other life choices would not, and we hate how difficult that can be at the same time.

People come here for something, but they stay for something else.  It’s never the place you thought it was going to be – the place you read about or saw in the movies.  It is all those things, but it’s so much more. The good is better than you ever thought possible, and the bad is almost more than you can bare.  The ones who remain here understand that nothing stays the same for long.  It’s the universe on a pin head.