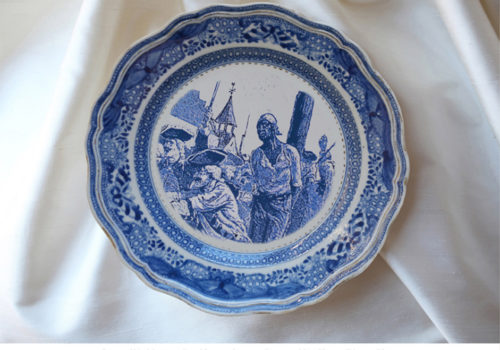 Kathleen Clark is an artists and photography editor living and working in Southern California. She was the Director of the contemporary Los Angeles photography galleries Spot Photo Works and Clark | Oshin Gallery. In her personal work she utilizes photography and mixed media to explore themes of environment, language, home, family and history. She has exhibited works in galleries such as COCA in Seattle, the Portland Art Museum, Southern Exposure in San Francisco and LACE in Los Angeles. She has a Master of Fine Arts degree in studio art and photography, and served on faculty at the Art Center College of Design and at the University of Southern California. In addition she was a recipient of commissions and grants for collaborative work (with The Girl Artists of Portland, Oregon) from the National Endowment for the Arts, the Oregon Arts Commission, Seattle Arts Commission, Bumbershoot Festival and the Metropolitan Arts Commission, Portland, Oregon. Kathleen was the longtime Photo Director of Los Angeles Magazine and LA Weekly newspaper and freelance photo edits for Sunset magazine.

She works privately with fine art, commercial and editorial photographers in the editing of their work for books, portfolios and other presentations and publications in addition to developing and enriching overall bodies of work. She won numerous awards from the Society of Publication Design, American Photography and the City and Regional Magazine Awards.

Her recent work published here is The White House China, a book of photographic and mixed media reconstructions based on the famed presidential dinner collection in Washington, DC.

Patricia Lanza : What was your process in the research and development for the photographic series The White House China?

How did you come to choose the China to express presidential attributes from their time in office?

Kathleen Clark : In terms of research, I travelled to Washington D.C in the spring of 2016 thinking I’d immerse myself in the graphic elements of government and historical depictions of federal philosophy. I was interested in the grand presentations of patriotism and all the contradictions of how policy actually manifested. The gaudy fanciful decor at the White House and Capitol fascinated me. My interest was piqued when I learned that First Lady Dolly Madison introduced the idea of hospitality essentially as public relations and diplomacy.

I was equally intrigued by the china collection at The White House and at The Smithsonian Museum of National History and several months after seeing the decor in person, I began to see the series in my mind. I was already making landscapes, still life and conceptual work based on American history and politics and it struck me that a reconstructed china series could address a multitude of ideas, including the overriding idea of masking reality with decoration.

I was also informed by my personal history of having a family of antique dealers with a recently discovered ancestral lineage going back to the colonists, as well as a late father-in-law with an extensive collection of presidential letters and documents that fascinated me. I also have a collection of antique illustrations on black history purchased decades ago at a flea mart. They suddenly reminded me of china patterns and once I visualized marrying them with the State china patterns, the idea became clear.

Over time I looked at everything I could find from personal collections, the Library of Congress, the National Archives, various museum, state and library archives and did some additional travel to historic colonial locations. I collected, read, and stumbled onto related topics, constantly discovering things I didn’t learn in school. I searched auction houses and political paraphernalia. There were two distinct research tracks: one was the political narrative of what happened historically that became the central image of each piece and the other track was researching the actual china patterns.

PL : Where did you obtain the White House china for the story? What was most challenging?

KC : Most of the plate or dish rims are reproductions of Presidential china I purchased online. Some I recreated with a combination of digital drawing and photography based on feeble renderings or verbal description I found in research. Not all the presidents had official china so there was a great amount of guess work. Many used sets of dinnerware created by prior administrations or their personal family porcelain, so I repeated here and there. I used a new china pattern for President No. 45 – a close approximation of the Mar-a-Lago china.

PL : Your insertion of illustrations and actual artifacts depicting the policies of each president, how did you decide what to highlight?

KC : I researched each president’s historical record to understand their tragic flaws that would then be the central image of each piece of china. That took a great deal of time, especially in the face of my own limitations in comprehending history. Once I had a distilled idea, I searched relentlessly for compatible illustrations in the public domain which reflected that racial or cultural inequity, greed, avarice, violence or failure of some type. In some cases, I made my own central illustrations or photos.

PL : What was surprising when you were researching the U.S. Presidential histories?

KC : Halfway through the project, I found an old political ceramics book in my local library and discovered a porcelain Jasperware medallion called Am I Not a Woman and A Sister? The image was a variation of one of the earliest plates that I made to represent President James K. Polk. It featured a relief image of a black woman in shackles made by the Wedgwood ceramics company to promote the cause of the abolition of slavery in the late 1700s. Later, I found more abolitionist china at the Reeves Collection at Washington and Lee University in Virginia. They were dishes and teacups for children to teach them of the horrors of slavery.

When I started the project, I had no idea that ceramics had been used in this way in the distant past and it was surreal to learn that I was replicating the same idea from 320 years ago, albeit with the implication of the complicity of many of the American Presidents.