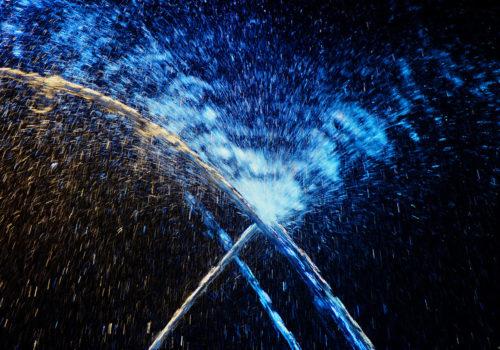 Since moving from Milan to Los Angeles in the 1990s Gianluca Galtrucco has added extensively to his experience as a fine art photographer. He also wrote, produced, and directed the award-winning short film Blind Spot (2007).

Galtrucco has produced two books of photography, For Your Consideration (2017) and Time Traveler (2021) both published by Hatje Cantz, Germany. Time Traveler the touring photographic exhibition will premier at the Edition ONE Gallery, Santa Fe, NM in July 2022 followed by the Leica Gallery, West Hollywood, CA. in August. His first NFT’s inspired by Time Traveler, Alien and Spaceman will launch on The Secret, Blockchain, Fall of 2022.

This latest book of photographs, Time Traveler, he abducts our sensibilities, casting us into a cosmos that ends science. We encounter UFOs, some of them strangely antiquated, others futuristic. We come across an astronaut eating in a diner or machines and vehicles that fill what could be interplanetary colonies. Time Traveler is full of unlikely scenes that collapse time and space.

Galtrucco’s artworks have been showcased in numerous venues, including the groundbreaking group show, “New Italian Landscape,” curated by Maria Grazia Torri, which toured throughout Italy in 1999, and “7 Artists Meet,” mounted in 2000 at the Sharjah Art Museum. His one-person exhibition, “Metamorphosis,” curated by Giovanna Zamboni Paulis and Alma Ruiz, was displayed at the Italian Cultural Institute in Los Angeles in 2000. He has had solo shows in Milan, Barcelona, and New York. He also participated in the Florence Biennale and the MIA Photo Fair in Milan.

Patricia Lanza: The series and book publication, Time Traveler, is about Outer Space, space travel and our search for intelligent life in the universe. How did your interest begin in this subject and your influences?
Gianluca Galtrucco: My fascination with space travel began in my youth when I enjoyed movies about outer space and read science-fiction novels. But my influences have been wide-ranging. Among my favorite books are Luigi Ghirri’s photo based Atlante and Italo Calvino’s Invisible Cities. Time Traveler is a contemplation, a visual meditation on the heavens, on space travel, and on extraterrestrial life. I also want this series and publication to be a visit to the past and the future, a visit that humankind has made repeatedly over the last millennium. I grew up in Milan, within walking distance from the Planetarium, the Brera Academy (which had been an astronomical observatory). These affected my early interest in the cosmos

PL: What are the distinctive plots in this series?
GG: The series follows four distinctive plots: the astronauts’ space travel and return to Earth and their daily lives, the possible abduction of humans by aliens, the metallic entrails of the aerospace industry (with its installations, control panels, monitors, and massive storage tanks), and the silent beauty of the soft skies.

PL: Your work takes a cinematic approach how did coming from Italy and living in Los Angeles did affect your style?
GG: When I moved to Los Angeles, the capital of world cinema. There, I. encountered a wildly inconsistent cosmos, one in which luxury, artifice, spectacle, and glamour coexist with poverty, naiveté, crime, and bleakness. This is the surreal life of Los Angeles, a place of visual incongruities, just like in the movies. Los Angeles has also become a site of science-fiction reveries through the development of the aerospace industry.

PL: You explore the idea of extraterrestrial life what are your thoughts about this considering the recent release of data being published on UFO’s and the subject?GG: While I shot many of these images around Los Angeles, I was also interested in finding locations that evoke visions of otherworldly sentient beings and UFO’s. Naturally, I visited the now-legendary sites of possible contact with space aliens, including Roswell, New Mexico, and Nevada’s “Extraterrestrial Highway,” Route 375. The recent data being published by government agencies confirms there are UFO’S. I believe there are other “life” forms in the universe, but what shape and form they make take is still undiscovered including intelligent beings.

PL: What are you looking to do with your book and series?
GG: I will be having an opening event and exhibition on July 1 to July 30, 2022, at the Edition One Gallery in Santa Fe, NM to coincide with the 75th Anniversary of the UFO/Roswell NM.as well as a book signing. The Leica Gallery in Los Angeles will host my exhibition on August 4 to mid– September of 2022.

PL: Galtrucco; Why have you decided to enter the blockchain space with your Time Traveler NFT series?
GG: Blockchain’s offer of decentralized ownership and exchangeable digital goods made sense to me. Although I cannot claim to comprehend NFTs’ implications fully, they present an opportunity to exchange art and create a community. I have been waiting for the right situation to launch my first NFT. The Time Traveler exhibit is that moment as the collection represents humanity’s pursuit of endeavors more extraordinary than itself. There is something paradoxically alluring about creating something for dissemination on the web, and the structures and limits of a unique digital identifier that cannot be copied, substituted, or subdivided. This new way of defining artworks adds another meaningful dimension to it. Creation can be ephemeral, and if the artistic crucible is a melting pot, then NFTs can capture the moment of melting, which is magic.