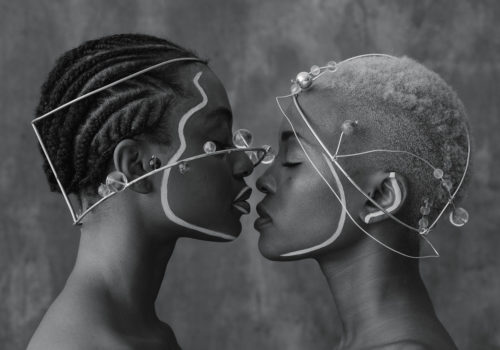 Delphine Diallo is a Brooklyn-based French and Senegalese visual artist and photographer.

She graduated from the Académie Charpentier School of Visual Art in Paris in 1999 before working in the music industry for seven years as a special effect motion artist, video editor and graphic designer. In 2008, she moved to New York to explore her own practice after giving up a cooperate Art Director role in Paris. Diallo was mentored by acclaimed photographer and artist of Peter Beard who was impressed by her creativity and spontaneity before offering her to collaborate for the Pirelli calendar photo shoot in Botswana. Inspired by new environments on this trip, she decided to return to her father’s home city of Saint-Louis in Senegal to start her own vision quest.

Sought to challenge the norms of our society, Diallo immerses herself in the realm of anthropology, mythology, religion, science and martial arts to release her mind. Her work takes her to far remote areas, as she insists on spending intimate time with her subjects to better able represent their most innate energy “I treat my process as if it were an adventure liberating a new protagonist” — Diallo’s powerful portraitures unmask and stir an uninhibited insight that allows her audience to see beyond the facade. “We are in constant search for wonder and growth. I see art as vessel to express consciousness and an access to diffuse wisdom, enlightenment, fear, beauty, ugliness, mystery, faith, strength, fearless, universal matter”.

Where ever she can, Diallo combines artistry with activism, pushing the many possibilities of empowering women, youth, and cultural minorities through visual provocation. Diallo uses analog, digital photography and collages  as she continues to explore new mediums. She is working towards creating new dimensions and a place where consciousness and art are a universal language by connecting artists, sharing ideas and learning.

Patricia Lanza : The beginning of your artistic career were as a designer and film editor, discuss working with Peter Beard and his influence in your pursuit of a career in photography?

Delphine Diallo : I met Peter Beard in Paris in 2008 and we really connected with ideas and artistic vision. I was a graphic designer and film editor, and I was not doing photography at that time but I ended up showing him some of my photography from Senegal, my family pictures from there. A few months later I got a call to work with Peter and I ended up being hired as his creative assistant to go on a photo shoot in Africa, Botswana for the Pirelli calendar. That experience was very special it really changed me being in nature with animals especially with elephants, also seeing Peter working every day on the assignment but also creating his diaries, his personal work. I was consulting him on the pages of the Pirelli calendar and worked with him on the design. This interaction also made me think about my own creativity and what I wanted to do going forward, and it made me consider a career as a photographer––the Africa journey and my experience there with Peter. I was living between Paris and New York at that time and I decided to move to New York city permanently. I was 31 years old when I moved to New York with like 300 dollars in my pocket. My friend had a house in Harlem, and I moved there. I decided I didn’t want to work in the graphic design world, as I needed to get out of this reality, and I also needed to be able to learn and express myself in English, so at first I worked in a restaurant, the hospitality industry.

Patricia Lanza : Discuss your work especially the portraiture series and imagery of women and the idea of black women and how they are portrayed.

Delphine Diallo : When it comes to the objectification of women especially black women in the media, they are usually oversexualized especially after a history of 200 years of oppression. I realized I could not be a designer any more but my intention was to reframe or change the conversation through the medium of photography because women are in need of a different narrative to empower them. The woman’s body should be one with most respect, without it we would not have birth nor either feeling of the mother’s often unconditional love. I worked in the music industry and there is a lot of discrimination especially if you are a “girl” and you were usually underpaid and did much of the work and they always called you the “girls.” I think the problem was underrepresentation in that industry of both women and brown skin people that were not in positions of power.

I feel through my work as a photographer especially in the portraiture series I represent women as the warrior, the healer and create and build a different archetype for their representation, especially in the superficiality of the ideals of beauty. I hope my work can be a starting place for changing the conversation about women and the media’s obsession with the female form.

Patricia Lanza : Discuss your series about transformation with self–portraiture and collage.

Delphine Diallo : Every year I was taking a portrait of myself, and it showed me a vision of transformation because we are constantly changing. So each year for ten years I took a picture, I didn’t plan on the time frame, but over the course of ten years it gave enough time for many things––physically–– to change and for me to accept the mountain of changes. I got older and wiser and my decision is to not judge anymore. In the space of no judgement the ability to elevate and to grow. This is not like taking a selfie or part of this selfie culture. It is more about the internal self, and revelations about the manifestations of change.

As far as my collage, working in this artistic medium I found very healing especially for myself being a visual maker. This is creating a physical diary of sorts. I was inspired by Beard, watching him work daily on his collage which were about storytelling, his story, and his experiences. It is a memory journal working in this medium. I find I have to be alone for several days in order to work on these. I am accessing my talent and career in design and graphics as well as photography in their creation, and I can work on large pieces as well. Size is not a limitation.

Patricia Lanza : In the near future, how will you be working in both NY (USA) and Senegal, what will you be undertaking?

Delphine Diallo : I will be dividing my time between Senegal (where my family comes from), and New York. This will give me a chance to develop more visual poetry, an incredible expanding journey. I have a big connection with Senegal, my family roots are from St. Louis du Senegal and then Ngor Island ( where I would like to live in the near future), close to Dakar. Ngor Island is called the ‘”family island.” I am very attracted to these small islands where there is very little traffic and people are friendly. There I am going to teach children and at the present time I do not know the ages. The course of study will be art and photography including collage of course.

Patricia Lanza : What is your vision for your artistic career, especially in photography?

Delphine Diallo : My purpose, my intention is to create a work for women to feel empowered and leave a legacy of art books for the next generation of women.. This is inclusive of the conversation about women, and her reflection in society. I have connection now to living in Europe, Africa and the US, and in the future to engage, teach and work in the arts and explore the world.

I will be participating in the National Geographic Seminar in January, called the Storytellers Summit. It is January 11-15, 2021. I will be discussing my collage work. This is a remote event.