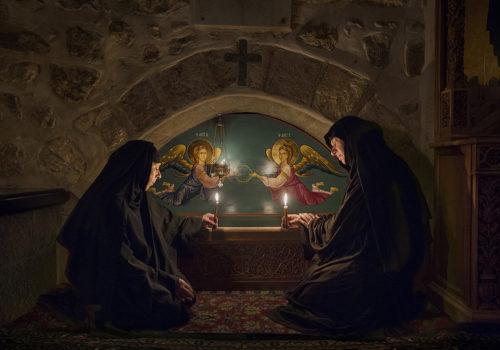 Dafna Tal is based on the Red Sea in Eilat, Israel. Her artistic practice and approach incorporates photography, video, and sound. This work explores emotional and mental perceptions as expressed in various communities and environments.

The photographic series, A Lasting Faith (2014-2015) portrays the religious community of the Orthodox Church in the Holy Land, today’s Israel, and the Palestinian Authority. The work encompasses portraits of monks and nuns in prayer, services, rituals, and on location in churches and surrounding landscapes. The entire series was photographed at night by candlelight or by moonlight. Throughout antiquity Christianity and religion have been intricately interwoven with the narrative history of art.

Tal started her artistic exploration with theatre and sculpture. She later studied at New York’s International Center of Photography (ICP), and continued her studies in cultural project management, where she received a European Diploma from the Association Marcel Hicter, Belgium.

Her works have been exhibited internationally including at the Casula Powerhouse Arts Center in Sydney Australia, Museum On The Seam in Jerusalem (2019), and Visa pour L’Image, Perpignan, France. A Lasting Faith solo exhibitions include: The Hermitage Museum, St. Petersburg (2018),  Museum of Christian Art, Sofia, Bulgaria (2017),

Patricia Lanza : How did you come to create the series of photographs, A Lasting Faith, of the religious order of the Orthodox Church in the Holy Land?

Dafna Tal : The focus of my works (and a major interest in my life in general) is the investigation of the inner world: those thoughts, beliefs, feelings that motivate us to shape our lives and the world. The religious world had and still has a very significant presence in human culture. The perceptions of the customer world from education and the religious world, therefore, are deeply rooted in the personal and collective subconscious. Some of these mental and behavioral motifs find expression in the photographs, for example the desire to resemble the idol painted on the walls of the church and the attempt to search for answers and illuminate the darkness of uncertainty. These are human issues which, in their current version, may still motivate large sections of society and I find them of great interest.

Other elements which caught my eye when I was first introduced to the community were the distinct similarity that the members of this community, which is considered the most traditional Christian community in the Holy Land, have to images from the history of art. I was also interested in the emotional and devoted expression that stood out among the believers belonging to this community.

Patricia Lanza : What were the challenges?

Dafna Tal : The challenges that are easiest to point out are the external challenges, for example the careful and gradual process of connecting to the members of the community, the hard physical work that sometimes included 17-hour work days with a heavy weight on the back, the need to learn to photograph in almost completely dark conditions, and so on. But precisely these challenges did not constitute an obstacle or really made it difficult for me.

These are the mental challenges that managed to stop, delay, and cause me frustration so many times. First it was the confusion and not knowing what to focus on in the project – from a program and visual point of view since there are countless ways to represent the same community and landscape. After that it was the countless failures to implement the vision I saw in my imagination that made me despair. Another challenge was learning to accept the vast difference between the amount of time I planned to spend on the project, and the amount of time it actually took. And of course, there are more.

Patricia Lanza : The photographic technique of shooting by candlelight or moonlight gives your series a timeless and painterly quality. How did you come to choose this aesthetic and what was your photographic process?

Dafna Tal : At the beginning of the project, I conducted experiments, I took pictures at different times of the day and in different situations and I still did not find a focus. I worked on the project alongside an art curator and it was he who drew my attention to the fact that the photographs taken at night are the most special. With his help I chose to focus on these moments and choose images according to their symbolic character, the atmosphere and feeling they evoke and also in a way that evokes an affinity between them and the representation of Christianity in the history of art.

The photography process included slow and patient work, using a tripod and long exposure and repeatedly arriving at the same places and ceremonies. I also used a tilt and shift lens in some of the large interiors or vast landscapes in order to sustain the proportion of the view and architecture without distortion and resemble the large format camera I loved using at school as much as possible.

Patricia Lanza : What did you learn or take away from being embedded with this monastical community?

Dafna Tal : The most significant aspect to me is the human experience: the countless people and conversation I had, where I learned about the life path, ideas, motivation, and world view of some of the communities members.

Beyond that, getting to know the life of this ancient community was truly unforgettable experience: the liturgy and rituals, the ancient art, history, and architecture of the holy places. I had experiences I will never forget, such as attending the Holy Light ceremony in the Church of the Holy Sepulcher in Jerusalem, where thousands of excited believers with candles in their hands or walking in the heart of the Judean Desert in the dark night during the feast of St. George.

Since I come from a secular Jewish background, during the making of this project I consulted an inter-religious expert and took a course about Christianity to get a better understanding. So, this was also an important cultural learning experience for me.

Finally, fulfilling a complex project takes time. This was many times frustrating for me yet looking at it presently I can evaluate that this time was full of gifts, a gift of many accumulating experiences and a gift of learning that I can run long distances with my ideas. Thus, in terms of the creative process -fulfilling this project gave me confidence in my ability to fulfill long term complex projects.

Patricia Lanza : Discuss what brought you to the Red Sea and what is the focus of your recent work?

Dafna Tal : It is yet another new artistic idea that took me into the Red Sea in the same way my previous project ideas took me to the old city of Jerusalem and to Virginia, USA.

I have been actually visiting the Red Sea and practicing scuba diving for years and never considered filming and photographing underwater as this is a very challenging, demanding and also pretty expensive task; But then one day I came up with this new artistic video idea which took place underwater. And when striking ideas come, I already learned they will not leave until I fulfill them. So, I have moved to the Red sea in order to fulfill its production. Once I was there and started to work on the main video project I planned, more ideas came up and a new working environment and possibilities opened up for me.

This new underwater video work, called Anchor Point, is actually just about to be release which is exciting. It will be first presented in the Royal Ulster Academy of Arts in Belfast this October 2022.

The underwater environment is truly another planet and I will sure continue to explore it. Let’s see where in the planet my next inspiration will lead me.